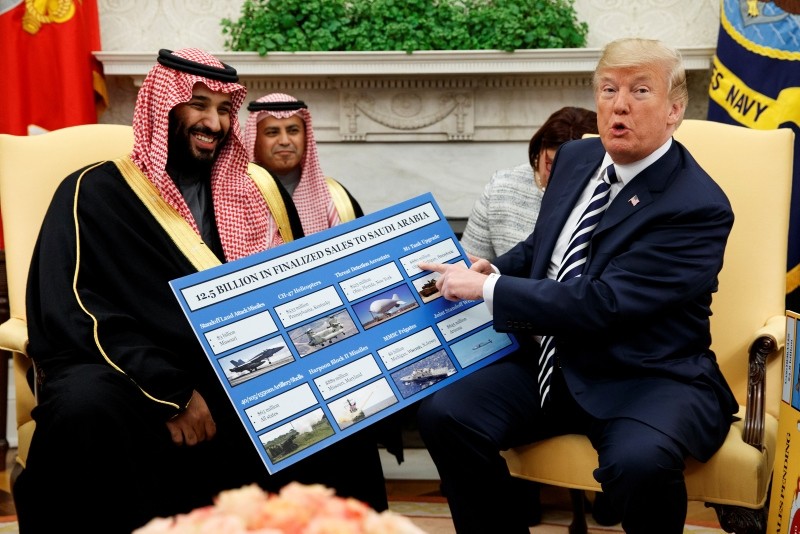 The Trump administration has been heavily invested in a new Middle East plan that involves Saudi Crown Prince Mohammad bin Salman and Mohammed Bin Zayed, the Crown Prince of Abu Dhabi, building better ties with Israel and pressuring Palestinians for a deal that is not necessarily in their favor - in order to fight their common enemy Iran.

An investigative report by Adam Entous published on the New Yorker in June detailed the young Gulf leaders' and Israel's efforts to curb Iran's influence in the region with the support of U.S. President Donald Trump, who, unlike his predecessor, had an admiration for Israeli Prime Minister Benjamin Netanyahu, and a pro-Israel and pro-Likud electoral base.

According to the report, after the death of former Saudi King Abdullah bin Abdulaziz Al Saud, Saudis' stance on Palestine drastically changed as MBS shared MBZ's views that Israel would be a partner in plans to undermine Iran and putting an end to the Palestinian conflict was mandatory for them to have a more open relationship with Israel.

Entous' piece said MBS told American officials in Riyadh and Washington that "Israel's never attacked us," and "we share a common enemy." He even went on to say that he was prepared to have a full relationship with Israel and voiced contempt for the Palestinian Authority.

The contacts between UAE and Israel started long before Trump's presidency, the report said. Toward the end of Obama's presidency, U.S. intelligence officials found out that senior UAE and Israeli officials held a secret meeting in Cyprus, in which the officials suspect Netanyahu was also in attendance. The meeting was reportedly focused on countering Obama's nuclear deal with Iran and neither side informed the U.S. administration about the talks.

An attempt to form a peace initiative was also put forward by former U.S. President Barack Obama and former Saudi King Abdullah bin Abdulaziz Al Saud in 2002 when then the Saudi king proposed that Arab states recognize Israel in exchange for Israel withdrawing from all territory occupied since 1967. When Obama asked the king whether he would be willing to meet Netanyahu publicly, the King said such event would be "impossible" and that Saudis would be "the last ones to make peace with them."

This was not the first time the UAE approached Israel. According to the report, the Emiratis suggested Israel would supply armed drones to the UAE to make better behind-the-door relations. The plan, later on, was dismissed by Israeli officials out of fear of antagonizing the Obama administration, which back then refused to sell armed drones to the Emirates.

However, after Trump came to power, the process picked up pace. After the 2016 U.S. election, MBZ flew to New York for a discreet meeting with Trump's A-team Jared Kushner, Steve Bannon and Michael Flynn at the Four Seasons Hotel. MBZ reportedly told Trump's advisers that the UAE and Saudi Arabia were ready to join forces with the U.S. to pressure Iran and Israel was not the main problem in the region.

In May 2017, Trump met with Arab leaders in Riyadh and Kushner and MBS agreed on a draft plan they called 'a Middle East strategic alliance' and Israel would remain a "silent partner," the report said. MBS promised to pressure Palestinians to come to the table and Trump would "deliver Israelis."

The report said that Netanyahu now hopes that Gulf states would approve an American offer to form deeper cooperation with Iran and other enemies in the region. However, for the Palestinians, a division between the Gulf states and Palestine is their "worst nightmare" realized, according to an official for Palestinian President Mahmoud Abbas.