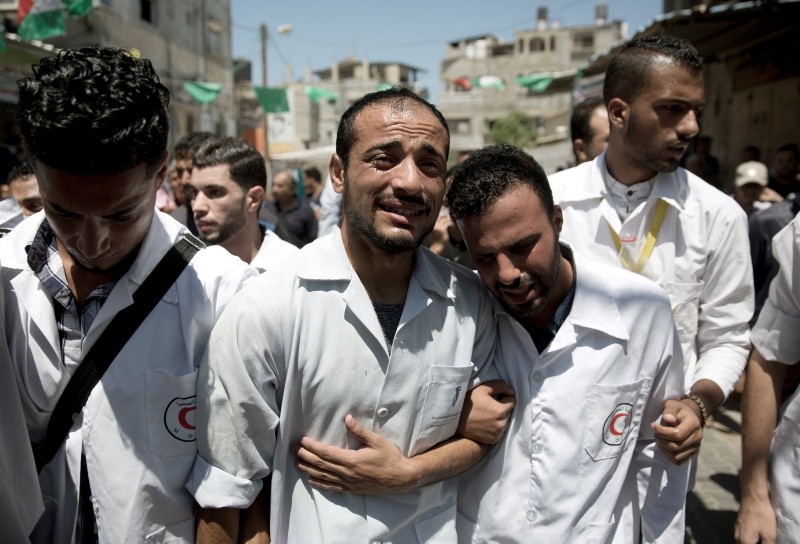 Palestinian paramedics mourn during the funeral of their colleague, Abdullah al-Qutati, who was shot and killed during the Friday's protest at the Gaza Strip's border with Israel, in town of Rafah, southern Gaza Strip, Aug.11, 2018. (AP Photo)
by Compiled from Wire Services Aug 11, 2018 12:00 am

A 40-year-old Palestinian hit by Israeli fire on the Gaza border died of his wounds on Saturday, taking the death toll from protests the previous day to three, the territory's health ministry said.

He was among at least 131 Palestinians wounded by Israeli bullets during Friday's protests, even as an informal truce ending a deadly flare-up between Hamas and the Israeli army largely held.

In all 307 Palestinians were wounded on Friday, some by tear gas, including two journalists and five medics, the health ministry in the coastal enclave said.

It identified the man who died Saturday as Ahmed Abu Lulu, saying he was shot in a section of the border east of the southern city of Rafah, where the two other Palestinians were also killed.

The ministry had earlier identified the other two as Ali al-Alul, 55, and volunteer medic Abdullah al-Qatati, 21.

Funerals for all three Palestinians took place on Saturday and were attended by thousands of mourners.

Doctors and first responders were among the mourners, in a show of solidarity for Qatati.

On Friday, a few thousand protesters gathered at various locations along the Gaza border.

At least 156 Palestinians have been killed since March 30, when Palestinians in the Gaza Strip began holding almost daily protests near the buffer zone.