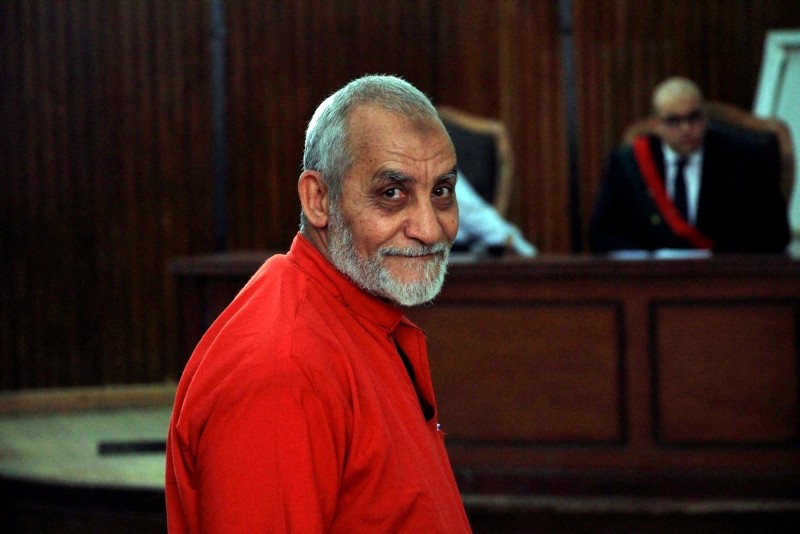 In this April 20, 2015 file photo, Muslim Brotherhood Supreme Guide Mohammed Badie wears a red jumpsuit that designates he has been sentenced to death, during a court hearing in Tora prison, Cairo, Egypt. (AP Photo/Lobna Tarek, El Shorouk Newspaper)
by Compiled from Wire Services Aug 12, 2018 12:00 am

An Egyptian court on Sunday issued life sentences five people, including the leader of the outlawed Muslim Brotherhood group, for violence-related charges, according to a local judicial source.

The Cairo Criminal Court sentenced Mohamed Badie and four other people, including Brotherhood leaders Mohamed al-Beltagi and Essam al-Erian, to life in prison, the source said.

Badie and the other defendants were convicted of incitement to violence on July 15, 2013, including the killing of five demonstrators and wounding of 100 during protests in an area in Giza known as al-Bahr al-Azim.

The court had previously sentenced 15 people to life imprisonment in the al-Bahr al-Azim case in September 2014 but an appeals hearing had subsequently struck down the ruling and ordered a retrial.

The verdict is the latest against Badie, who has been sentenced to death in separate trials since his arrest in 2013. Charges have included inciting violence and planning attacks against the state.

The court also slapped former Supply Minister Bassem Ouda with a 15-year jail term and three other people with ten years in prison each, the source said.

The defendants were charged with incitement and acts of violence that took place in 2013 following the ouster of democratically-elected president Mohamed Morsi in a military coup.

Egyptian authorities have launched a relentless crackdown on dissent since Morsi's ouster, killing hundreds and sending thousands behind bars on violence-related charges.

Since general-turned-president Abdel Fattah al-Sisi came to power in 2014, authorities have justified a crackdown on dissent and freedoms as being directed at terrorists and saboteurs trying to undermine the state.

Last month, a court referred the files of Badie and other Brotherhood leaders in a separate case to Egypt's most senior Muslim religious authority, the Mufti, for his opinion on whether they should be sentenced to death.

Egyptian law requires any capital sentence to be referred to Grand Mufti Shawqi Allam for an opinion before executions can take place. His opinion has yet to be announced.

Death sentences have been handed down to hundreds of his political opponents on charges such as belonging to an illegal organization or planning to carry out an attack. Morsi, who was ousted in 2013 after a year in office, is serving a life-sentence in jail.