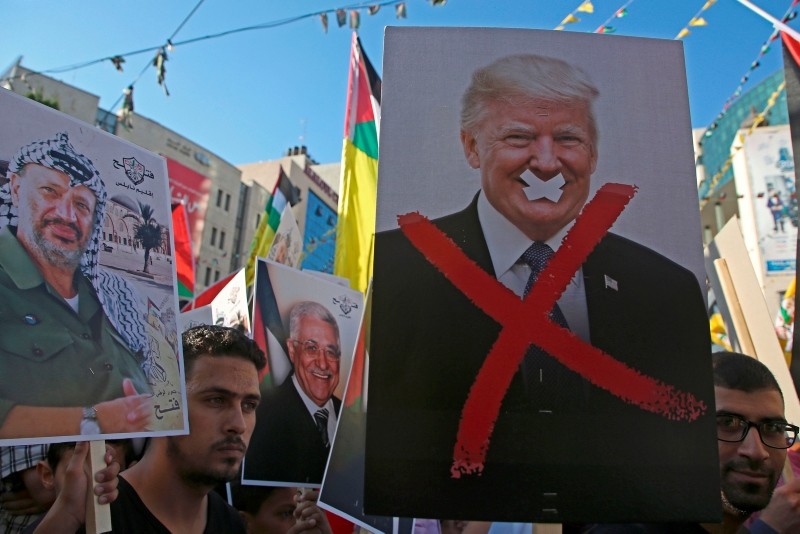 Palestinian protestors hold portraits of late Palestinian leader Yasser Arafat and US President Donald Trump during a rally in support to the Fatah movement in the West Bank city of Nablus. (AFP Photo)
by Aug 25, 2018 12:00 am

U.S. President Donald Trump's administration is resorting to "cheap blackmail" against the Palestinians, revealing its true intentions by cutting more than $200 million in aid for the West Bank and Gaza Strip, senior Palestinian officials said Saturday.

A State Department official said Friday that the decision, made "at the direction of the president", came after a review of aid programmes to the Palestinian territories.

The funding would "now address high-priority projects elsewhere", it added.

Saeb Erekat, secretary-general of the Palestine Liberation Organisation (PLO), said the decision amounts to an "admission of the true intentions behind American aid policy of intervening in the internal affairs of other peoples".

U.S. aid "is not a gift to our people but a duty of the international community to take responsibility for the continuation of Israeli occupation, preventing the development of the Palestinian economy and society," he said.

By slashing its aid to the Palestinians, the U.S. "once again reaffirms its disregard for its international commitments", Erekat added.

Hanan Ashrawi, a member of the PLO's executive committee, accused the US of using "cheap blackmail as a political tool".

The United States had already made drastic cuts to its contribution to the UN agency for Palestinian refugees, UNRWA, in January.

Relations between the U.S. administration and the Palestinian Authority took a nosedive after Trump in December decided to recognize Jerusalem as Israel's capital.

The Palestinians have suspended contacts with Washington and believe it can no longer be an impartial mediator in the Middle East peace process.

After the latest blow, Ashrawi insisted that Palestinians living under Israeli occupation would not be coerced into surrendering their rights.

"There is no glory in constantly bullying and punishing a people under occupation," she said in a statement.

"The US administration has already demonstrated meanness of spirit in its collusion with the Israeli occupation and its theft of land and resources," she said.

"Now it is exercising economic meanness by punishing the Palestinian victims of this occupation."

In an initial reaction on Friday, the PLO's representative in Washington, Husam Zomlot, told the U.S. administration was "dismantling decades of U.S. vision and engagement in Palestine".

The decision to cut Palestinian funding comes as a humanitarian crisis deepens in Gaza, which has seen a surge of violence since Palestinian protests erupted in March.

At least 172 Palestinians have been killed by Israeli fire, the vast majority of them during demonstrations near the border.