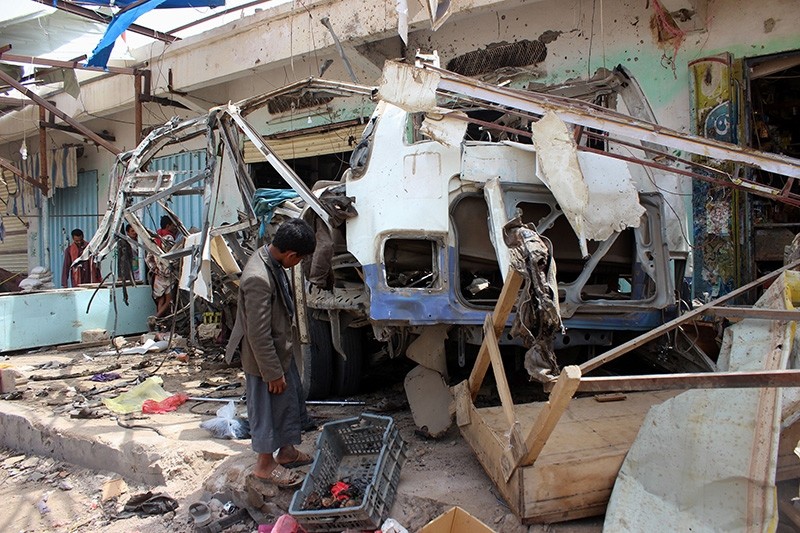 In file photo taken on Aug. 10, 2018, a Yemeni child stands next to the destroyed bus at the site of a Saudi-led coalition air strike, that targeted the Dahyan market the previous day in the Houthi rebels' stronghold province of Saada. (AFP Photo)
by Associated Press Sep 02, 2018 12:00 am

The report came days after U.N. human rights experts said all sides in the fighting may have been responsible for committing war crimes in the 3½-year conflict.

The coalition backing Yemen's internationally recognized government expressed regret Saturday and pledged to hold accountable those found to be responsible for the airstrike, which hit a bus carrying children in a busy market in the northern province of Saada. At least 51 people, including 40 children, were killed, and 79 others, including 56 children, were wounded.

The New York-based group said it spoke by phone to 14 witnesses, including nine children, who said that shortly before 8:30 a.m. on Aug. 9, a bomb fell on the market in Dhahyan, a town north of Saada in Houthi-controlled northwestern Yemen, 60 kilometers (37 miles) from the Saudi border.

The bomb landed a few meters from a bus packed with boys on an excursion organized by a mosque to visit the graves of men who had been killed in fighting, the group said. The bus was parked outside a grocery store where the driver had gone to buy water for the children, HRW said.

"I saw bodies torn into pieces, pieces of my friends. ... Many of my friends died," the group quoted Ahmad Hanash, 14, as saying. He and his brothers Hassan, 13, and Yahia, 11, were wounded in the attack.

Bill Van Esveld, senior children's rights researcher for HRW, urged the U.S. and other countries to "immediately stop weapons sales to Saudi Arabia and support strengthening the independent U.N. inquiry into violations in Yemen, or risk being complicit in future atrocities."

The U.S. reportedly supplied the bomb used in the attack on the bus, a laser-guided Mk 82 bomb manufactured by defense contractor Lockheed Martin.

The coalition said it has accepted the conclusions of its investigative body, known as the Joint Incidents Assessments Team, which found that the airstrike involved "mistakes," including failing to take measures to minimize collateral damage.

The coalition said in its statement Saturday that "it will take all the legal measures to hold accountable those who were proven to have committed mistakes" once it officially receives the findings. It also pledged to coordinate with Yemen's government to compensate civilians.

The U.S. State Department on Sunday called the coalition's statement "an important first step toward full transparency and accountability."

HRW's statement came after U.N. human rights experts said last week that the governments of Yemen, the United Arab Emirates and Saudi Arabia may have been responsible for committing war crimes, including rape, torture, arbitrary detention and use of child soldiers. The U.N. panel also pointed to possible war crimes committed by the Houthi rebels fighting the coalition.

The Associated Press reported last year that the UAE and its allied militias were running a network of secret detention facilities, beyond the control of the Yemeni government. In June, the AP reported that hundreds of detainees had been subjected to sexual abuse and torture.

The coalition has faced criticism for its campaign of airstrikes, while the Houthis have been accused of using land mines, killing and wounding civilians. They have also targeted religious minorities and imprisoned opponents.

The rebels also often attempt cross-border attacks on Saudi Arabia and have targeted the kingdom's vessels in the Red Sea.

Yemen's civil war pitting the coalition against the Houthis has been raging since March 2015. The coalition backs Yemen's internationally recognized government of Abed Rabbo Mansour Hadi and aims to restore it to power.

The U.N. says the conflict has become the world's worst humanitarian crisis, with more than 22 million people in desperate need in what is already the Arab world's poorest country.