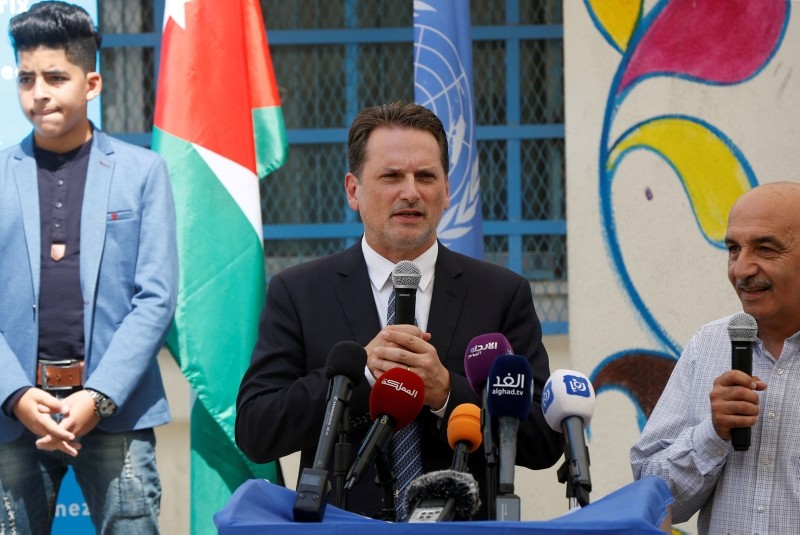 UNRWA Commissioner-General Pierre Kraehenbuehl speaks during the official ceremony to return to school at one of the UNRWA schools at a Palestinian refugee camp al Wehdat, in Amman, Jordan, September 2, 2018. (Reuters Photo)
by Sep 02, 2018 12:00 am

Washington's decision to end funding for the United Nations aid agency for Palestinian refugees was politically motivated, the agency's chief said, rejecting United States explanations that it was linked instead to how the organization was run.

Pierre Krahenbuhl, the head of the United Nations Relief and Works Agency for Palestine Refugees in the Near East (UNRWA), on Sunday expressed his "deepest regret and fundamental disappointment" at the decision taken by the U.S. two days ago.

He urged donors to help cover a deficit of $217 million for this year.

"I want to make it very clear here that it was taken, for my understanding, for reasons that are political in nature and has nothing to do with with UNRWA's performance," Krahenbuhl said in the Jordanian capital Amman.

"I say this with great confidence because during meetings I had in Washington in November 2017, shortly before the first measures were taken, there was a lot of recognition and respect expressed from U.S. official about the way that UNRWA runs its operations," he added.

Krahenbuhl was attending a ceremony in an UNRWA-run school at al-Wehdat refugee camp, in south-east Amman, to mark the beginning of the school year.

Earlier this year, the U.S. said it will only provide UNRWA with $60 million for its operations for Palestinian refugees in Jordan, the West Bank, Gaza and Syria, down from $365 million last year.