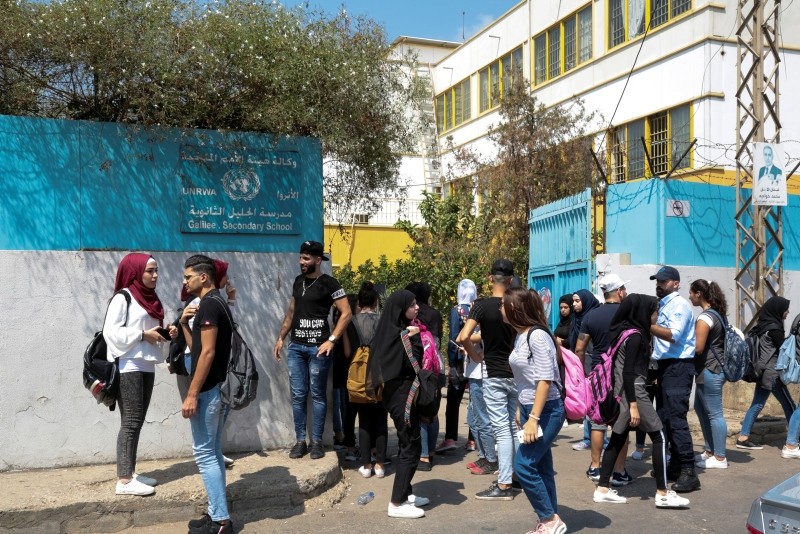 United Nations schools for Palestinian refugees in Lebanon started the new school year on time on Monday, despite the U.S. decision to cancel funding to the international body's Palestinian relief agency.

Students were giddy as they arrived at the Haifa Intermediate School in Beirut's Bir Hassan neighborhood on Monday and sat through their first language, history, and math lessons of the year.

Claudio Cordone, director of UNRWA affairs in Lebanon, called it a "joyful day," and called on donor nations to fill the deficit left behind by the U.S. decision announced Friday.

It was a day many thought would not come, at least not on time, as UNRWA faces some of its toughest pressures in its 68-year history. The Trump administration, encouraged by Israel, has expressed deep skepticism over the agency's mission to provide education and social services to over 5 million Palestinian refugees across the Middle East.

UNRWA was founded in 1949 to serve some 700,000 Palestinians who were uprooted from their homes in the war to create Israel.

Palestinians depend on the UNRWA to get by outside their homeland, in countries that treat them as second-class residents with only limited rights.

The agency relies on the U.S. for 30 percent of its budget. But the Trump administration on Friday called UNRWA an "irredeemably flawed operation" and halted $300 million in planned donations on the grounds that it is an obstacle to a settlement between Palestinians and Israel. The agency strongly rejects the characterization.

"Today we can express our deep regret over the announcement from the US that it will not fund the agency after decades of support. And we reject the criticism that the UNRWA schools and its health centers and its emergency assistance program is plagued by defects, and that they cannot be reformed," said Cordone.

He said the agency was facing a $217 million deficit.

Rawan al-Hassan, a pupil, said students were acutely aware of the budgetary situation.

"We are happy, it's the first day of school, we're going to see our friends again. But we're not very happy because they're saying that the books are not good. They're preparing us because there's nothing good for us," said al-Hassan.

Earlier this year, the U.S. said it will only provide UNRWA with $60 million for its operations for Palestinian refugees in Jordan, the West Bank, Gaza and Syria, down from $365 million last year.