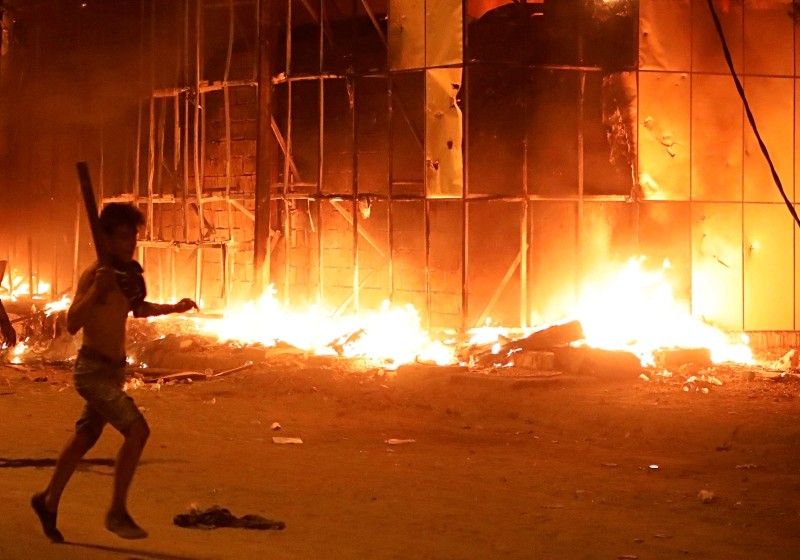 Hundreds of protesters stormed and set fire to the Iranian consulate in Iraq's southern city of Basra on Friday, an AFP photographer said, as they vented their anger over poor public services. After the demonstrations intensified and the mission was set ablaze, Iran closed the Shalamjah border with Iran.

Thousands of demonstrators rallied outside the building while hundreds stormed into the consulate and set it ablaze, the photographer said.

One protester has died and 11 more were wounded during demonstrations, local security and health sources said.

Iraq's most revered Shi'ite cleric called for a political shakeup in Baghdad and a halt to violence against demonstrators earlier on the same day after days of deadly protests tore through the biggest city in the south and shut the country's main sea port.

Ayatollah Ali Sistani, the ultimate authority for devout members of Iraq's Shi'ite majority, placed blame for the unrest with political leaders and said a new government should be formed, "different from its predecessors".

At least 10 protesters have died since Monday in Basra, a city of 2 million people where residents have torched government buildings and political party offices and clashed with security forces. They say they have been driven to the streets because of corruption and misrule that allowed infrastructure to collapse, leaving no power or safe drinking water in the heat of summer.

Prime Minister Haider al-Abadi's national security council met on Friday and said it was pursuing an investigation into the casualties at the protests. Abadi, under pressure to promise more money to fix Basra's public services, said funds that had previously been allocated would be released.

Hundreds of people, including many women, gathered in Basra on Friday afternoon to mourn a protester who health sources said died overnight from burns sustained during the torching of the provincial government headquarters.

Mourners carried the body from his house, through the streets of Basra to the singed government building where he was wounded, chanting: "This is a promise, this is a promise, Basra won't stay silent anymore".

Some protesters shot live rounds into the air, not unusual for a mourning procession. Others carried broomsticks to "sweep clean" Basra's corrupt officials.

Protesters set fire to what remained of the government and municipality buildings that were torched the night before.

On Thursday demonstrators escalated the unrest by shutting down Umm Qasr, Iraq's only big sea port, 60 km south of Basra, which handles the vast majority of imports into a country dependent on food bought abroad to feed its 37 million citizens.

It remained shut on Friday, local officials and security sources said. Iraq's oil exports which are carried out from offshore platforms have not been affected.

Iraq's politicians have so far failed to agree a new government after an inconclusive election in May. The new parliament finally met on Monday for the first time but broke up after a day with no faction assembling enough votes to elect a speaker much less name the next prime minister.

Sistani, an 88-year-old cleric who normally holds himself above day-to-day politics, has been known to intervene in political affairs when he sees the country's future in danger.

In his Friday prayer sermon read out by an aide, he demanded an end to the use of violence against "peaceful protests" and placed the blame squarely on politicians for corruption, poverty and unemployment.

"The failings of Iraqi political leaders in recent years have caused the anger of people in Basra," Sistani said.

"This reality cannot change if the next government is formed according to the same criteria adopted when forming previous governments. Pressure must be exerted for the new government to be different from its predecessors."

Parliament's interim leader summoned lawmakers to an emergency session on Saturday to discuss the unrest.

Iraq's political factions mainly came together during a 2014-2017 war against Daesh terrorist group and Baghdad's two most influential allies, Washington and Tehran, and backed the government despite their deep hostility to each other.

But since Daesh was largely defeated last year divisions have re-emerged. Shi'ites in the south, where most of Iraq's oil wealth is produced, say Baghdad politicians have squandered state funds while leaving them desperate.

Sadr, the former leader of an anti-American Shi'ite sectarian militia who has reinvented himself as an anti-corruption campaigner, has allied himself with Abadi.

Their alliance is competing to form a government against a rival bloc backed by Abadi's predecessor Nuri al-Maliki and the leader of an Iran-backed Shi'ite armed group, Hadi al-Amiri. Amiri called on Abadi to resign over the crisis on Friday.