Gaza hospital to shut down within days if doesn't get fuel 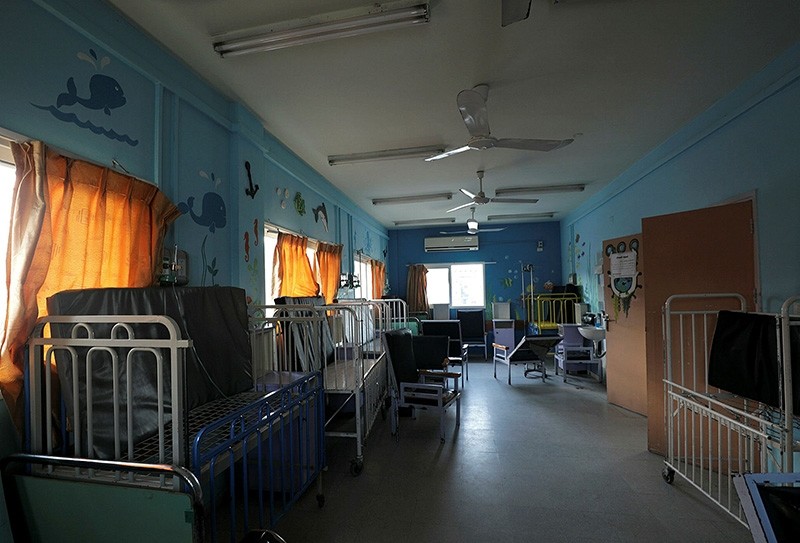 A hospital in Gaza forced to suspend services due to fuel shortages. (File Photo)
by Compiled from Wire Services Sep 13, 2018 12:00 am

The Abu Yusuf al-Najjar Hospital in the southern Gaza Strip will cease functioning within nine days due to a lack of fuel needed for its electricity generators, Gaza's Health Ministry has warned.

In a Wednesday statement, the ministry said that if health services are halted at the hospital (located in Gaza's southern city of Rafah), as many as 250,000 people could be affected.

In recent weeks, the ministry has repeatedly warned of the impending collapse of Gaza's local health sector due to a chronic shortage of fuel needed to keep hospitals' emergency generators up and running.

Home to some 2 million people, the Gaza Strip has a total of 13 government-run hospitals and 54 primary health care centers, which together account for roughly 95 percent of all health services in the coastal enclave.

The U.N. said Wednesday that the situation in Gaza was "catastrophic" after 11 years of "economic siege" and warned that Washington's decision to halt assistance to Palestinian refugees would create "more misery."

"The situation in Gaza is becoming less and less livable," said Isabelle Durant, the deputy head of the United Nations development agency (UNCTAD).

"It is catastrophic," she told reporters in Geneva.

In a new report, the U.N. agency said the Palestinian economy, long stifled by the Israeli occupation, was being hit hard by a sharp drop in international support to Palestine, even before Washington's dramatic cuts.

And at $720 million, it stood at just a third of the $2 billion received a decade earlier, the UNCTAD report showed.

That dramatic drop in support came before US President Donald Trump's government decided to completely halt its funding for the U.N. agency for Palestinian refugees (UNRWA), which had previously stood at around $350 million a year.

The Trump administration has also scrapped around $200 million in payments by U.S. Agency for International Development to the Palestine, and at the weekend said it would cut $25 million more in direct aid to six hospitals that primarily serve Palestinians in Jerusalem.

The declining international support, coupled with "a freeze in the reconstruction of Gaza and unsustainable credit-financed public and private consumption, paint a bleak picture for future growth," UNCTAD said in a statement.

The widespread restrictions on the movement of people and goods, confiscation of land and natural resources, and the accelerating expansion of Israeli settlements were also damaging, it said.

Wednesday's report slammed the shackling of the economy in the Palestinian territories, which are struggling with the world's highest unemployment rate -- of more than 27 percent overall and around 44 percent in Gaza alone.

Women and youth are disproportionately impacted by the lack of jobs, it said, with half of Palestinians under the age of 30 out of work, while only 19 percent of women participate in the labor force.

In a report last year, the U.N. agency said that the Palestinian economy could easily double and that sky-high unemployment and poverty would plummet if the Israeli occupation were lifted.

And in its latest report, UNCTAD suggested that simply removing some of the Israeli restrictions on Palestinian trade and investment could allow the territory's gross economy to swell by up to 10 percent.

Removing restrictions on Gaza was particularly important, UNCTAD said, warning that the Strip had been "reduced to a humanitarian case of profound suffering and aid dependency."

Mahmoud Elkhafif, who coordinates UNCTAD's Assistance to the Palestinian People Unit, told reporters that the agency had not yet analysed the impact the U.S. cuts might have on the Palestinian economy, but stressed they would certainly result in "more misery" in Gaza especially.

In 2012, UNCTAD warned that the area risked becoming "uninhabitable" by 2020 unless trends were reversed, but on Wednesday the agency said conditions "are worse" than when they made that prediction.

In the past decade, Gaza has been subjected to three major military operations and a continuous and crippling air, sea and land blockade, which have "eviscerated" its productive capacity, it said.

Gaza's some 1.8 million residents currently count on average a real income per person that is 30 percent lower than in 2000.

And Elkhafif pointed out that half of the people in the Strip were considered food-insecure even before the U.S. announced its cuts to UNRWA, which provides aid to some 80 percent of the population.

Simply lifting the blockade would quickly see its economic growth shoot up by a third, the report said.