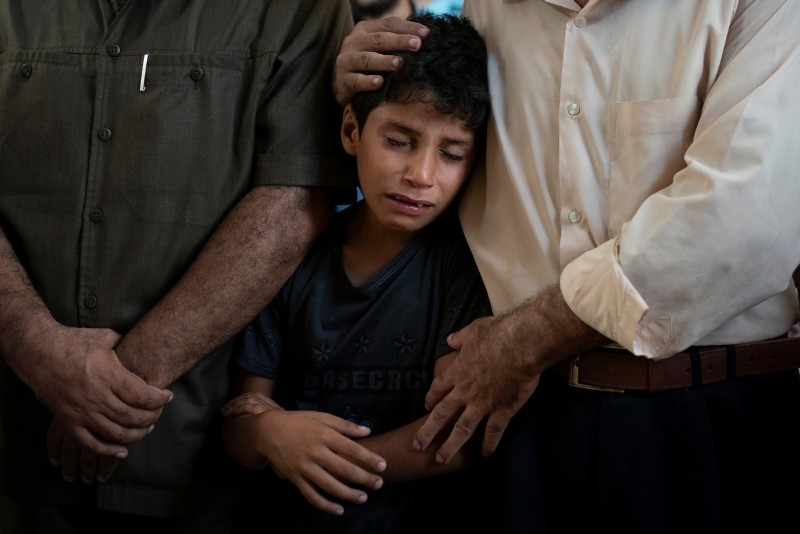 Hundreds of Palestinians attended Saturday the funeral of a 12-year-old boy killed by Israeli army fire during clashes on the Gaza border.

Shadi Abdel Aal was fatally wounded Friday during demonstrations east of Jabalia in northern Gaza, becoming one of the youngest Palestinians to be killed in months of unrest along the frontier.

Hundreds of family members and friends attended the funeral, with some calling for revenge.

"God burn those that burned my heart and killed my son," said his mother Umm Shadi, who has eight other children.

"What is my son guilty of? He is 12 years old," she added through tears.

She said her son had been going to the protests in recent months but she had been opposed. "I banned him but he was going behind our backs," said the grieving mother.

Mohammed, a 12 year-old friend also from Jabalia refugee camp, said he was with Abdel Aal when he was hit.

"We were throwing stones at the fence," he told AFP, referring to the heavily-guarded Israeli border line.

The friend said Shadi had been hit by a tear gas grenade fired by Israeli soldiers and collapsed instantly.

He was among three Palestinians fatally wounded by Israeli fire on Friday. A total of at least 179 Palestinians have been killed since violent demonstrations began along the border on March 30.

One Israeli soldier has been shot dead by a sniper.

Israel accuses the Gaza Strip's rulers of Hamas of orchestrating the protests and says it is merely protecting its border.

The Jewish state maintains a crippling blockade on Gaza which it says is necessary to isolate Hamas, with whom it has fought three wars since 2008.