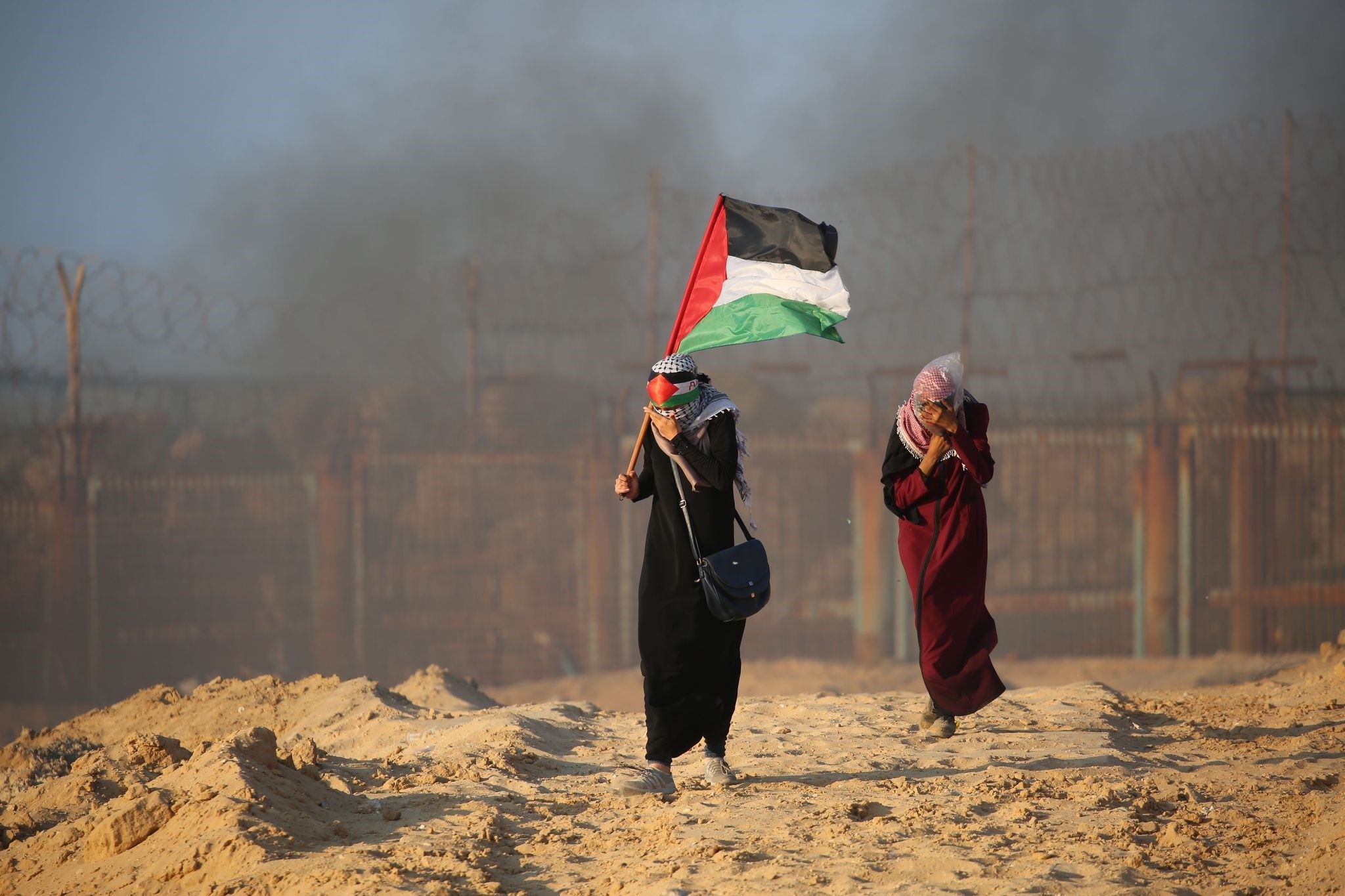 A Palestinian woman carries her national flag on a beach in Beit Lahia near the maritime border with Israel, Sept. 17.
by Compiled from Wire Services Sep 19, 2018 12:00 am

Israeli fire wounded dozens in Gaza as thousands protested the blockade of the Gaza Strip from the sea, in hopes of ending the worsening humanitarian crisis

Thousands of Palestinians gathered Monday on the beach along the border fence separating the Gaza Strip and Israel to demonstrate against Egypt and Israel's blockade. The Israeli navy, firing live ammunition, intercepted ships that had departed from the shores of the northern Gaza Strip and were heading towards the maritime border with Israel, according to the National Movement to Break the Siege, which organized the event. Gaza's Health Ministry said 26 Palestinians were wounded by Israeli gunfire while 69 others were affected by tear gas during a mass protest on the border with Israel

The attempt was preceded by seven others since May 29. Hamas has vowed to continue organizing weekly demonstrations along the Gaza-Israel buffer zone until Israel lifts its 11-year-blockade of the Gaza Strip. "The Great Return March has been the lifeline of the Palestinian cause," Hamas leader Ismail Haniyeh told supporters in Gaza City on Monday, in reference to the weekly demonstrations along the fraught buffer zone. "And it will continue until our objectives are met, especially the lifting of the Gaza blockade," he added.

The Great Return March began on March 30, when hundreds of thousands of Palestinian demonstrators converged on the buffer zone separating Gaza from Israel. Israel has responded to the rallies, still held every Friday, with deadly force, killing more than 150 protesters until now and injuring thousands more. Israel was criticized by a U.N. human rights body for its killing of protesters in Gaza and treatment of Palestinians, declaring it a "war crime" under the Statute of Rome. The high casualty toll triggered a diplomatic backlash against Israel and new charges of excessive use of force against unarmed protesters.

Israel's long-lasting blockade of the Gaza Strip has created chronic shortages in Palestinian health facilities. The humanitarian situation in the occupied Palestinian territories is deteriorating further as hospitals struggle to cope with high casualties since protests on the Gaza-Israel border began on March 30.

Gaza's health system of 13 public hospitals and 14 clinics run by nongovernmental organizations had buckled under persistent blockade-linked shortages of medicines and surgical supplies.

Since 2007, the Gaza Strip has groaned under a crippling Israeli and Egyptian blockade that has gutted its economy and deprived its roughly two million inhabitants of many vital commodities, including food, fuel and medicine. In the long-embargoed enclave, the humanitarian situation has got worse each day. According to Palestine's official statistics agency, the poverty rate in Gaza reached 53 percent in 2017, with at least 250,000 people facing unemployment. An ongoing Israeli blockade, imposed since 2006, is believed to be the primary reason for economic stagnation.