8 European countries call on Israel to not demolish Palestinian village 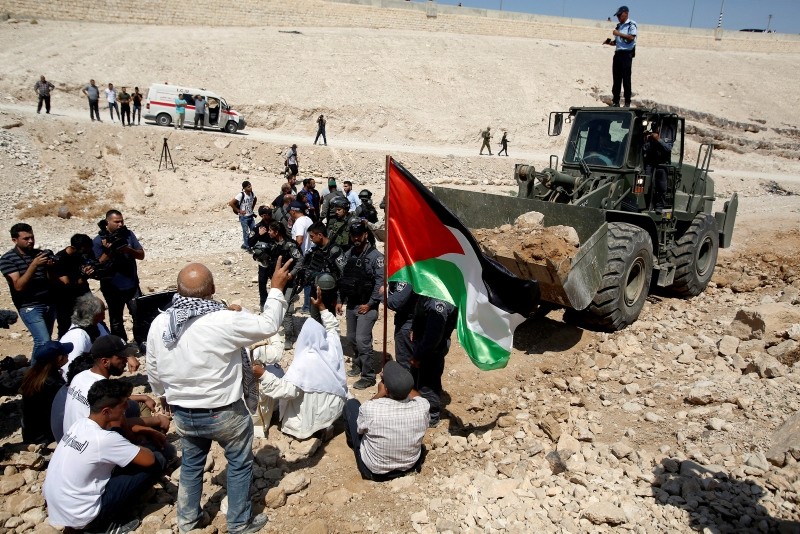 Palestinians gather in front of an Israeli bulldozer as they protest against Israel's plan to demolish the Palestinian Bedouin village of Khan al-Ahmar, in the occupied West Bank September 14, 2018. (Reuters Photo)
by Compiled from Wire Services Sep 20, 2018 12:00 am

Eight European Union nations voiced their opposition to Israel's planned demolition of the Palestinian village of Khan al-Ahmar and are urging its government to reconsider the decision.

The statement was read by Dutch Ambassador Karel van Oosterom outside the U.N. Security Council on Thursday. It rebuked the Israeli High Court's Sept. 5 decision to demolish a Bedouin village, Khan al-Ahmar in the occupied West Bank.

The eight countries were France, Netherlands, Poland, Sweden, the U.K., Belgium, Germany and Italy. They said in the statement that they "will not give up on a negotiated two-state solution with Jerusalem as a capital" of both Israel and a new Palestinian state.

The residents of Khan al-Ahmar are the descendants of Bedouins who were expelled from the Negev by Israel after 1948, and who were relocated to the West Bank. Around 180 Bedouin, raising sheep and goats, live in tin and wood shacks in Khan al-Ahmar. It is outside Jerusalem between two Israeli settlements and was built without Israeli permits, which Palestinians say are impossible to obtain. Israel said it plans to relocate the residents to an area about 12 kilometers away, near the Palestinian village of Abu Dis. But the new site is next to a landfill, and rights advocates say that a forcible transfer of the residents would violate international law applying to occupied territory.

In May, the Supreme Court rejected a final appeal against its demolition after nine years of hearings before various tribunals. The international community called on Israel to reserve the illegal demolition order and forcible transfer of Palestinian Bedouin villages.

During the Security Council meeting yesterday, Special Coordinator for the Middle East Nickolay Mladenov briefed council members on the current status of the Israeli-Palestinian conflict. "All settlement activities are a violation of international law," he said. Around 2,800 housing units in the occupied territories of the West Bank were approved by the Israeli government, according to Mladenov. Meanwhile, 117 Palestinian homes were either demolished or seized by Israel in the West Bank and East Jerusalem, resulting in 145 Palestinians being displaced.

Settlements are one of the most heated issues in efforts to restart Israeli-Palestinian peace talks, frozen since 2014. The international community regards all Israeli settlements in occupied Palestinian territories to be illegal and a major obstacle for Middle East peace.

The area, captured by Israel in 1967, is not sovereign Israeli territory, and Palestinians there are not Israeli citizens and do not have the right to vote. Some 500,000 Israelis live in the West Bank and east Jerusalem, areas that are also home to more than 2.6 million Palestinians. Palestinians have long argued that Israeli settlements could deny them a viable and contiguous state.