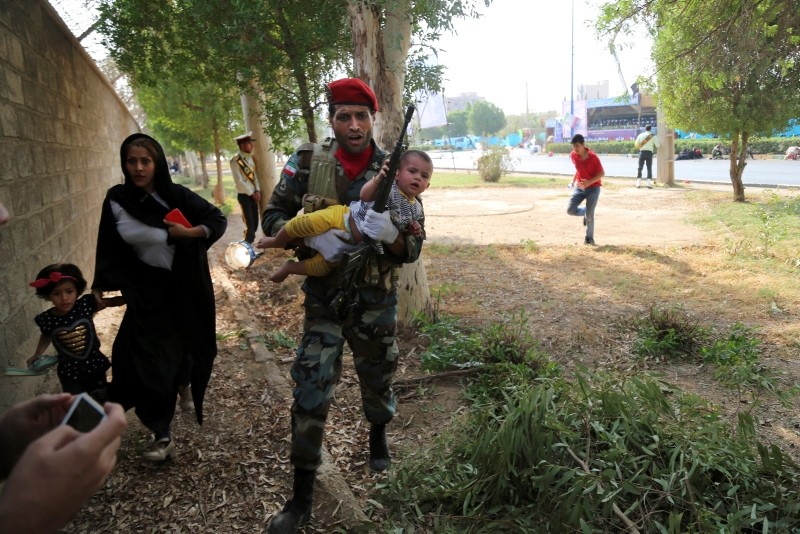 In this Saturday, Sept. 22, 2018 file photo provided by Mehr News Agency, an Iranian soldier carries a child away from a shooting during a military parade, in the southwestern city of Ahvaz, Iran. (AP Photo)
by Anadolu Agency Sep 23, 2018 12:00 am

Iran has declared Monday a day of mourning for Saturday's attack on a military parade which killed at least 25 people.

Over 60 people were also injured in Saturday's attack in Ahvaz, southwestern Iran, in which gunmen wearing military uniforms fired at Iranian forces for about 10 minutes, according to Iran's IRNA official news agency.

The casualties included a woman and a child, a journalist and members of the Iranian Revolutionary Guards, IRNA reported.

According to a statement issued by the Iranian presidency, funerals for victims of the attack will be held on the day of mourning. The statement also expressed condolences to the victims' families.

Islamic Revolution Guards Corps (IRGC) spokesman Ramezan Sharif said Saturday: "The attack by some elements of al-Ahvaziya group, supported by Saudi Arabia, aimed to overshadow the magnificence of the parade by the Iranian armed forces."

However, later Saturday the Daesh terrorist group claimed responsibility for the attack online.

The Ahwazi Democratic Popular Front (ADPF) or Al-Ahwazi on Sunday accused the Iranian Revolutionary Guards of committing the attack itself to gain sympathy.