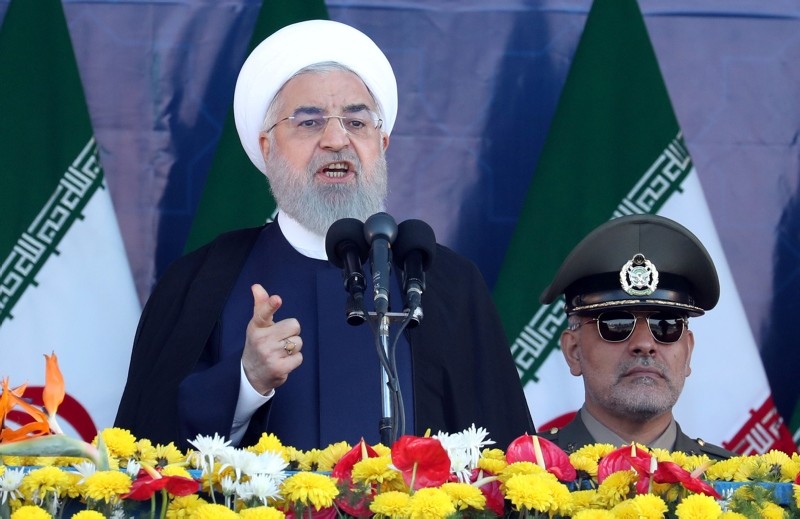 Iranian President Rouhani delivers his speech during the annual military parade, hours before gunmen opened fire killing at least 24 people, and injuring dozens during the parade in Ahvaz, 22 September 2018. (EPA)
by Associated Press Sep 23, 2018 12:00 am

Iran's President Hassan Rouhani said Sunday that an unnamed U.S.-allied country in the Persian Gulf was behind an attack on a military parade that killed 25 people and wounded around 70.

Rouhani did not identify those behind Saturday's attack, which was claimed by an Arab separatist group. He could have been referring to Saudi Arabia, the United Arab Emirates or Bahrain — close U.S. military allies that view Iran as a regional menace over its support for militant groups across the Middle East.

"All of those small mercenary countries that we see in this region are backed by America. It is Americans who instigate them and provide them with necessary means to commit these crimes," Rouhani said.

Saturday's attack, in which militants disguised as soldiers opened fire on an annual Iranian military parade in the oil-rich southwest, was the deadliest attack in the country in nearly a decade. Women and children scattered along with once-marching Revolutionary Guard soldiers as heavy gunfire rang out in Ahvaz, the chaos captured live on state television.

The region's Arab separatists, once only known for nighttime attacks on unguarded oil pipelines, claimed responsibility for the assault, and Iranian officials appeared to believe the claim. Iran summoned diplomats from Britain, Denmark and the Netherlands early Sunday for allegedly harboring "members of the terrorist group" that launched the attack.

Iran's Deputy Foreign Minister Abbas Araghchi later said the UAE ambassador would be summoned over "partial statements" in support of the group behind the attack, without elaborating.

Iranian Foreign Minister Mohammad Javad Zarif had earlier blamed regional countries and their "U.S. masters" for funding and arming the separatists, issuing a stark warning as regional tensions remain high in the wake of the U.S. withdrawal from the Iranian nuclear deal.

"Iran will respond swiftly and decisively in defense of Iranian lives," Zarif wrote on Twitter.

The parade was one of many around the country marking the start of Iran's long 1980s war with Iraq, commemorations known as the "Sacred Defense Week."

The attack killed at least 25 people and wounded around 70, according to the state-run IRNA news agency. It said gunmen wore military uniforms and targeted a riser where military and police commanders were sitting. At least eight of the dead served in the Revolutionary Guard, an elite paramilitary unit that answers only to Iran's supreme leader, according to the semi-official Tasnim news agency. State TV hours later reported that all four gunmen had been killed.

Supreme Leader Ayatollah Ali Khamenei described the attack as exposing "the atrocity and viciousness of the enemies of the Iranian nation."

"Their crime is a continuation of the conspiracies by the U.S.-backed regimes in the region which have aimed at creating insecurity in our dear country," Khamenei said in a statement.

Tensions have been on the rise since the Trump administration pulled out of the 2015 nuclear accord with Iran earlier this year and began restoring sanctions that were eased under the deal. It also has steadily ramped up pressure on Iran to try to get it to stop what Washington calls its "malign activities" in the region.

The U.S. government nevertheless strongly condemned Saturday's attack and expressed its sympathy, saying it "condemns all acts of terrorism and the loss of any innocent lives."

Initially, authorities described the assailants as "takfiri gunmen," a term previously used to describe the Daesh group. Iran has been deeply involved in the fight against IS in Iraq and has aided Syrian President Bashar Assad in his country's long civil war.

But later, state media and government officials seemed to come to the consensus that Arab separatists in the region were responsible. The separatists accuse Iran's Persian-dominated government of discriminating against its ethnic Arab minority.

Iran has blamed its Mideast archrival, the Sunni kingdom of Saudi Arabia, for funding Arab separatists. State media in Saudi Arabia did not immediately acknowledge the attack, though a Saudi-linked, Farsi-language satellite channel based in the United Kingdom immediately carried an interview with an Ahvazi activist claiming Saturday's attack.

Hamid Baeidinejad, Iran's ambassador to the U.K., called the channel's decision a "heinous act" in a post on Twitter and said his country would file a complaint with British authorities over the broadcast. Early Sunday, a Foreign Ministry statement similarly criticized Britain and said Danish and Dutch diplomats were told Iran "already warned" their governments about harboring Arab separatists.

Yacoub Hor al-Tostari, a spokesman for the Arab Struggle Movement to Liberate Ahvaz, told The Associated Press that members of an umbrella group of Ahvazi activists his organization leads carried out the attack.

The attack undermined the Iranian government "on the day it wants to give a message to the world that it is powerful and in control," al-Tostari said. To bolster his claim, he gave details about one of the attackers that the AP could not immediately verify.

The Daesh group also claimed responsibility for the attack, but provided no evidence it carried out the assault. They also initially wrongly said the attack targeted Rouhani, who was in Tehran at the time. The militants have made a string of false claims in the wake of major defeats in Iraq and Syria.

The Deash group carried out a coordinated assault in June 2017 on parliament and the shrine of Ayatollah Ruhollah Khomeini, the leader of Iran's 1979 Islamic Revolution. At least 18 people were killed and more than 50 wounded.

In the last decade, mass-casualty militant attacks have been incredibly rare. In 2009, more than 40 people, including six Guard commanders, were killed in a suicide attack by extremists in Iran's Sistan and Baluchistan province.