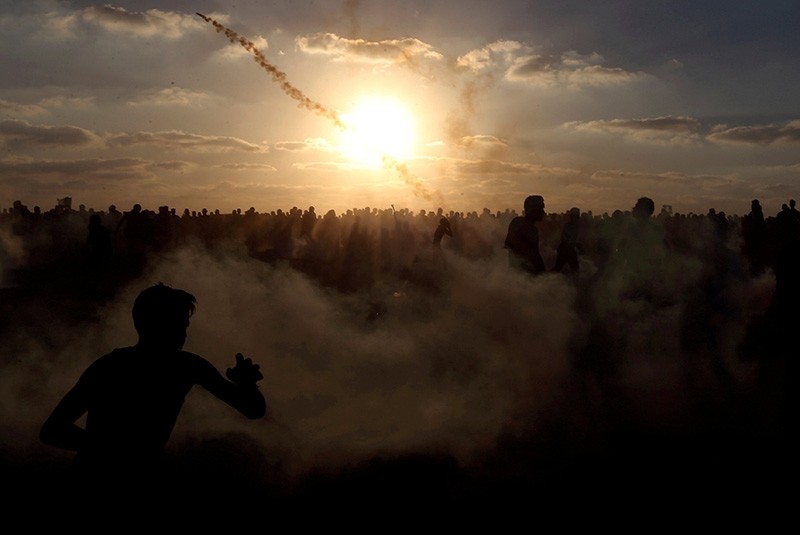 Palestinians run from tear gas during a protest calling for lifting the Israeli blockade on Gaza and demanding the right to return to their homeland, at the Israel-Gaza border fence, in the southern Gaza Strip Sept. 21, 2018. (Reuters Photo)
by Daily Sabah with AA Sep 23, 2018 12:00 am

The Israeli Air Force reportedly opened fire on Palestinian demonstrators near the Gaza border on Sunday, according to the Israeli Defense Forces (IDF).

It did not elaborate whether the aggression resulted in casualties.

Meanwhile, the Gaza Health Ministry said one Palestinian had been killed and 14 others wounded by Israeli fire near the Gaza border on Sunday.

The ministry said Omar Daud Ashtiwi, 21, was killed when he was shot in the head by live fire.

One of the injured was in critical condition, the statement added.

Since the latest round of Palestinian rallies began in late March, at least 186 Palestinians have been killed -- and thousands injured -- by Israeli troops deployed along the other side of the buffer zone.

Protesters are demanding the "right of return" to their homes and villages in historical Palestine from which they were driven in 1948 to make way for the new state of Israel.

They also demand an end to Israel's 11-year blockade of the Gaza Strip, which has gutted the coastal enclave's economy and deprived its more than 2 million inhabitants of many basic commodities.