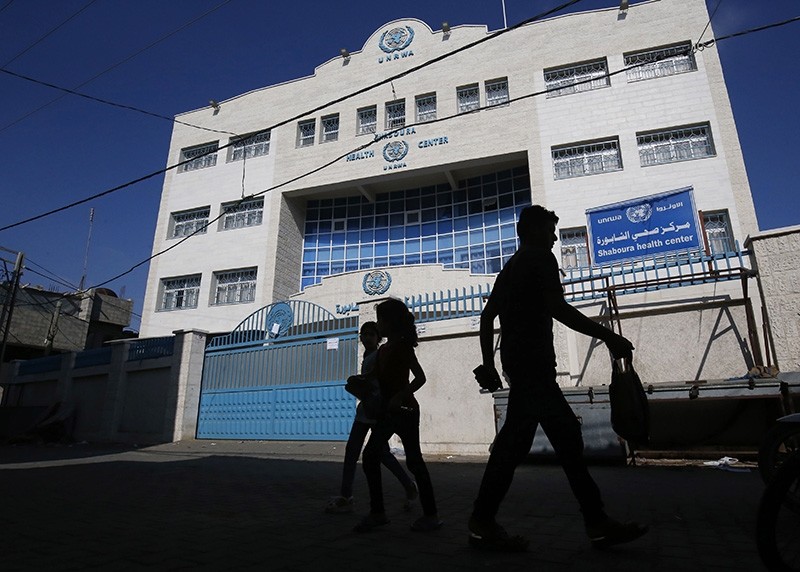 Palestinians walk past the closed offices of United Nations Relief and Works Agency (UNRWA) during a strike of all UNRWA institutions in Rafah in the southern Gaza Strip on Sept. 24, 2018. (AFP Photo)
by Compiled from Wire Services Sep 24, 2018 12:00 am

Staff at the United Nations agency for Palestinian refugees went on strike in the Gaza Strip on Monday to protest against job losses and U.S. funding cuts.

The one-day strike closed more than 250 UNRWA schools in Gaza, as well as medical centers and food aid distribution points.

The United States has traditionally been UNRWA's largest funder, providing around $350 million a year.

But President Donald Trump has cut all support, sparking a funding crisis.

More than 250 jobs have been cut in Gaza and the West Bank so far, while 584 of full-time staff positions have become part-time.

The refugee agency's labor union is demanding the job cuts be reversed and its leaders say the strike could be the first of a number of measures.

A small protest took place outside the agency's Gaza headquarters.

"The strike comes in light of the (UNRWA) administration's lack of responsiveness to the demands of the employees' union and their insistence on not solving their problems," Amal al-Batsh, deputy head of the union, said in a statement.

UNRWA says the funding deficit caused by the Trump administration's withdrawal of support is so severe cuts are unavoidable.

Around 13,000 people work for the agency in Gaza, where more than two-thirds of the roughly 2 million residents are eligible for aid.

UNRWA says more than 200,000 Palestinians attend its schools in the strip.

Established in 1949, UNRWA provides services to millions of Palestinians and their descendants in the blockaded Gaza Strip, the Israeli-occupied West Bank, Jordan, Lebanon and Syria who fled or were forced from homes in the 1948 war surrounding Israel's creation.