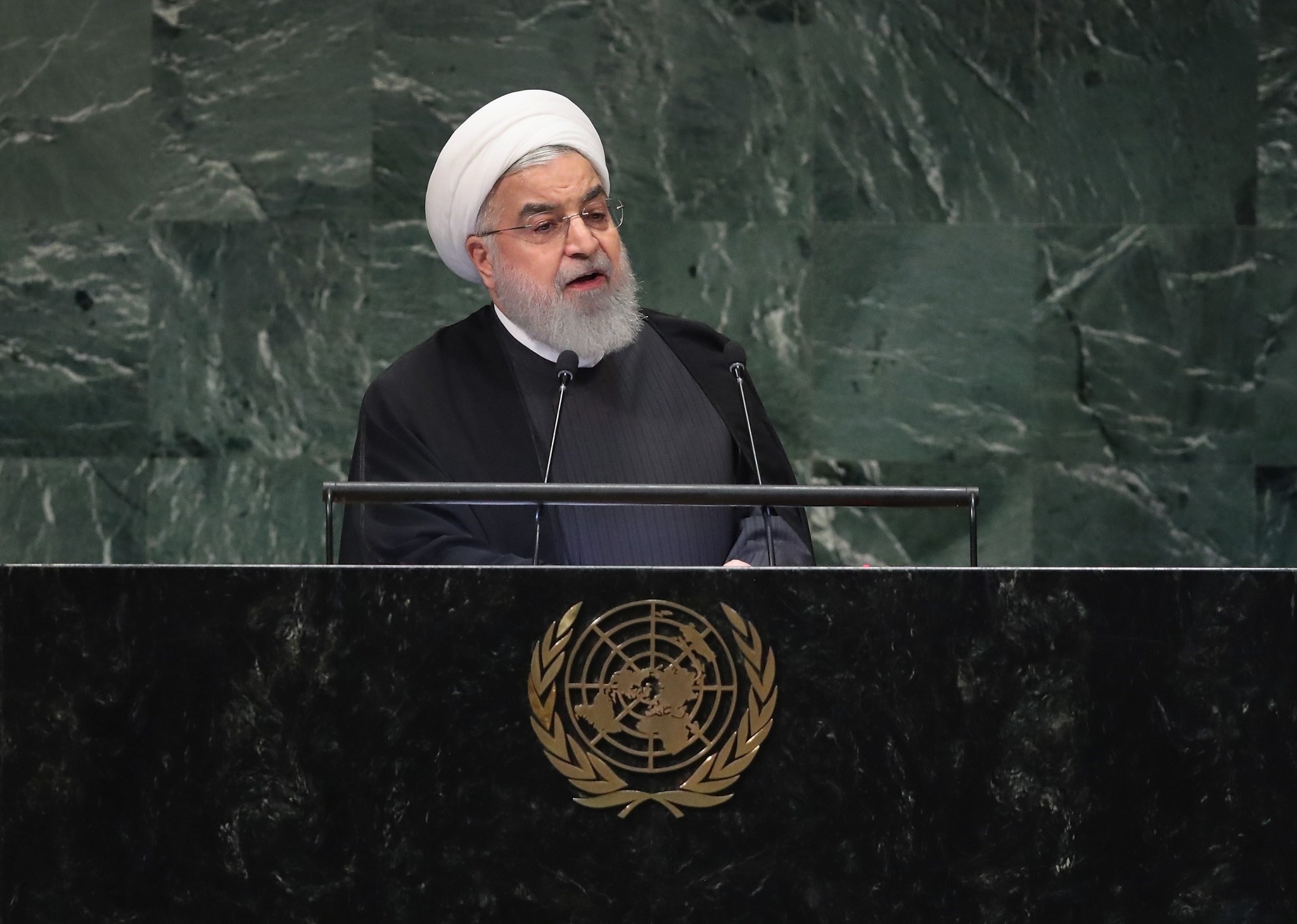 Iranian President Hassan Rouhani hit back at U.S. President Donald Trump in his speech to the U.N. General Assembly, but also invited him back to the negotiating table.

"Confronting multilateralism is not a sign of strength, rather a symptom of the weakness of intellect," Rouhani said on Tuesday, in a reference to Trump's speech a few hours earlier touting U.S. sovereignty.

Rouhani said it was "unfortunate" that some of the world's leaders preferred to secure their interests by "trampling on global rules and undermining international institutions."

The Iranian leader said he was pleased that the international community did not follow the Trump administration's "unilateral and illegal withdrawal from the JCPOA," the Joint Comprehensive Plan of Action as the nuclear deal is known.

"Unlawful unilateral sanctions in themselves constitute a form of economic terrorism," said Rouhani.

He then accused his U.S. counterpart of trying to topple his government, saying: "It is ironic that the U.S. government does not even conceal its plan for overthrowing the same government it invites to talks."

"For dialogue to take place, there is no need for a photo opportunity. The two sides can listen to each other right here in this Assembly.

"I am starting the dialogue right here, and state, in unequivocal terms, that the question of international security is not a toy in American domestic politics."

The Iranian leader continued to target Trump in language if not directly in name.

"The United States' understanding of international relations is authoritarian," he said. "In its estimation, might makes right."

Rouhani condemned "recklessness and disregard of some states for international values and institutions." He laid into leaders who believe they can "ride public sentiments and gain popular support through the fomenting of extremist nationalism and racism" and through what he called "xenophobic tendencies resembling a Nazi disposition."

Rouhani took the podium a few hours after Trump called for Iran's isolation in his U.N. address, accusing the leadership of Iran of sowing "chaos, death and destruction" as he defended his decision to ditch the Iran nuclear accord.

Trump, in his own speech, also said Americans "reject the ideology of globalism" in favor of what he called "the doctrine of patriotism." He also blasted what he called Iran's "corrupt dictatorship" and said its leaders "spread mayhem across the Middle East and far beyond."

The five remaining parties to the 2015 accord -- France, Britain, Germany, China and Russia -- agreed during a meeting in New York late Monday to set up a payment system to preserve business ties with Iran despite U.S. sanctions.

Trump withdrew from the nuclear deal in May, to the dismay of European allies, Russia and China which had invested years in negotiations to achieve a milestone agreement on keeping Iran's nuclear ambitions in check.

In his U.N. address last year, Trump bashed the nuclear deal as "an embarrassment," signaling that the United States was ready to walk away.

The U.S. is currently in the process of reimposing sanctions on Tehran.

Trump said he is not planning to meet Rouhani on the sidelines of the U.N. General Assembly. Rouhani told CNN he had not requested a bilateral meeting with the U.S. president.

In remarks released while Rouhani was still talking, U.S. National Security Adviser John Bolton doubled down on the decision to withdraw from the deal, calling it "the worst diplomatic debacle in American history." He echoed Trump's strong language and used blunt words to dismiss any entreaties from Tehran.

"According to the mullahs in Tehran, we are 'the Great Satan,' lord of the underworld, master of the raging inferno," Bolton said in remarks prepared for delivery at a New York meeting convened to oppose Iran's nuclear ambitions.

"So, I might imagine they would take me seriously when I assure them today: If you cross us, our allies, or our partners; if you harm our citizens; if you continue to lie, cheat, and deceive, yes, there will indeed be HELL to PAY," Bolton said.

The capitalizations were included in the text of the quotes released to journalists.