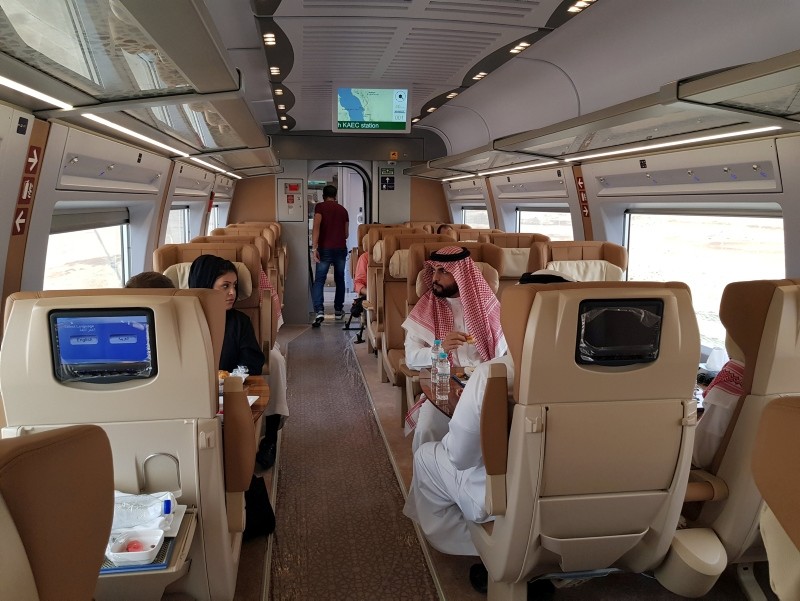 Saudi Arabia marked Tuesday the inauguration of the Haramain high speed railway service between the cities of Mecca and Medina.

Saudi King Salman bin Abdulaziz al-Saud also attended the event together with the Crown Prince Muhammad bin Salman, taking part in the maiden journey of the new railway. Their journey from Jeddah to Medina took about one and a half hour.

The high speed train will bring the total travel time between Mecca and Medina down to just about two hours.

The new line has a total of five stations with terminal stations in Mecca and Medina. Other stations include Jeddah, Rabigh and the King Abdulaziz International Airport.

The Haramain high speed railway will be opened to the public by October 1.

The authorities hope the train will also stimulate growth of King Abdullah Economic City (KAEC), a massive business zone that was initiated under the previous ruler but remains relatively empty.

It will eventually link up with a new terminal at Jeddah airport, which has already started serving select domestic routes and will take over all flights by early next year.

Fatallah said further expansion could include connecting to a planned east-west train between the capital Riyadh and Jeddah.

Officials aim to increase the number of umrah and haj pilgrims to 15 million and five million respectively by 2020, and hope to double the umrah number again to 30 million by 2030.

In addition to public transit, Saudi Arabia is investing tens of billions of dollars in mega-hotels and a Grand Mosque restoration in Mecca.

The Faisalia project, running from the edge of Mecca towards the Red Sea, aims to attract visitors to coastal getaways and Islamic research centers.

Mecca governor Prince Khalid al-Faisal, a nephew of the king and one of his closest advisers, anticipates that the initiatives will contribute to social and cultural development alongside economic growth.

"We want to begin from the point that others have already reached, not the point from which they began."