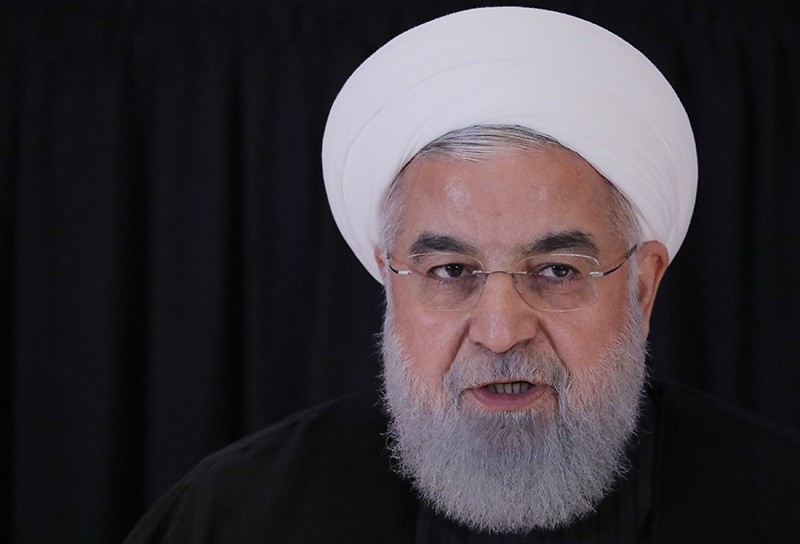 Iran's President Hassan Rouhani speaks at a news conference on the sidelines of the 73rd session of the United Nations General Assembly at U.N. headquarters in New York, U.S., Sept. 26, 2018. (Reuters Photo)
by Compiled from Wire Services Sep 26, 2018 12:00 am

"The United States of America one day, sooner or later, will come back. This cannot be continued," Rouhani told a news conference.

"We are not isolated; America is isolated," he said.

Rouhani pointed to a session of the Security Council chaired by Trump earlier Wednesday, where the leaders of Britain and France backed the nuclear deal, as well as a statement by European powers who say they will find ways to continue business with Iran and evade impending sanctions.

"We do hope with all the law-abiding and multilateral-oriented countries that we can ultimately put this behind us in an easier fashion than it was earlier anticipated," Rouhani said.

The elected Iranian leader said that his government would stay in the 2015 agreement, under which Tehran sharply scaled back its nuclear program in return for sanctions relief.

"Until such time that we keep reaping the benefits of that agreement for our nation and people, we shall remain in the agreement," he said.

"Should the situation change, we have other paths and other solutions that we can embark upon," he said.

Rouhani downplayed the sharp words from the US administration, including a warning Tuesday by Trump's national security advisor, John Bolton, that Iran would have "hell to pay" if it crosses the United States.

"During the past 40 years we have been subjected to that type of language many times," he said.

"In this American administration, unfortunately, the language has been said to be somewhat unique and they speak with a different style, presumably because they are new to politics," he said.

Trump earlier in the day railed against the Iran nuclear deal in his address to the U.N. Security Council, saying it has given a "regular cash lifeline" to Tehran and helped the country to "foment chaos."

Europe, Russia and China deliberately set themselves up to clash with Trump earlier this week as they announced plans to create new payment channels to facilitate business with Iran.

"Any individual or entity who fails to comply with U.S. sanctions on Iran will face severe consequences," Trump said.

The US has already imposed one set of sanctions on Iran since withdrawing from the Iran nuclear deal and is set to implement tougher measures on the country's energy sector in November.

Britain's Prime Minister Theresa May defended the deal as the "best means" of preventing Iran from developing a nuclear weapon.

Also at the Security Council meeting, Trump thanked Turkey for helping to broker a deal with Russia earlier this month to create a demilitarized buffer zone by the middle of October in Idlib, the last stronghold of opposition in the country.