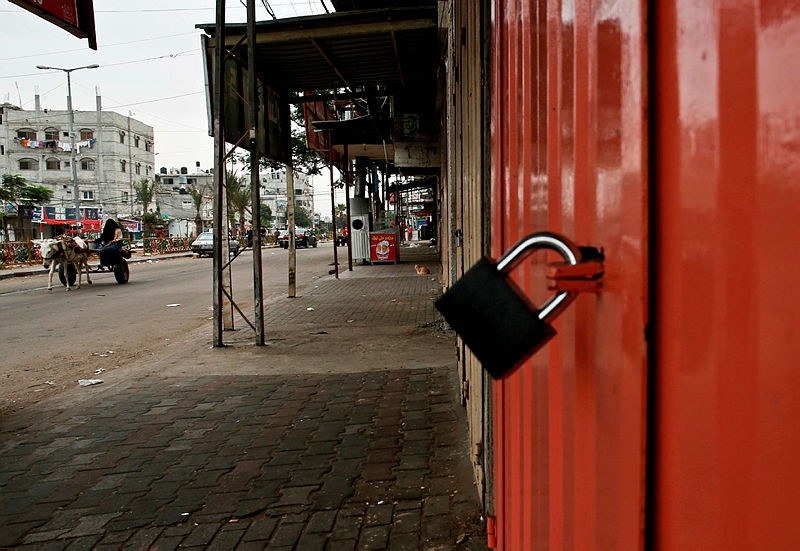 A Palestinian woman rides a donkey cart in front of closed shops during a general strike in support of an Israeli-Arab protest against the 'Jewish Nation-State Law' in Beit Lahya in the northern Gaza Strip on October 1, 2018. (AFP Photo)
by Daily Sabah with Agencies
Oct 01, 2018 12:00 am

Palestinians held a general strike Monday in the occupied West Bank, Gaza Strip and East Jerusalem in solidarity with Israel's Arab citizens over a contentious law that defines Israel as a Jewish state.

Israeli forces fired rubber bullets and tear gas canisters to disperse Palestinian demonstrators at the entrances of Ramallah and al-Bireh cities in central West Bank, according to local residents.

Passed by the Knesset in July with the support of Israel's far right, the nation-state law has garnered widespread criticism from Palestinians and the international community for its disregard of the norms of universal law and the rights of Palestinian-origin Israeli citizens. Arabs living in Israel have said the law verges on apartheid.

The general strike – called for by Palestinian leaders to emphasize the unity of the 1.8 million Palestinian-origin people in living in Israel and its occupied territories – shuttered schools, universities, transportation, commercial stores and other facilities on Monday.

National groups in the occupied West Bank and Jerusalem also declared their support for the strike against the controversial law.

"I can say that there is a complete commitment to the strike," Massoud Ghanayem, an Arab member of Knesset, told Anadolu Agency (AA).

"Palestinians throughout the occupied territories are taking part in the strike," Ghanayem said.

"This unity was necessary since the nation-state law targets all issues of the Palestinian people, whether refugees, their right to self-determination and presence of Arab citizens inside Israel," he said.

Mohammad Barakeh, a former Palestinian lawmaker said, "The strike is a message to the world that the use of apartheid and racism is something that should not only be dealt with internally but it should be talked about globally."

The Palestinian resistance group Hamas said the strike aims to highlight discrimination against the Palestinians living inside Israel.

The controversial law was set to be amended by Israeli Prime Minister Benjamin Netanyahu after it was passed in July. However, no such amendments have been made. The committee will reconvene in October to propose new legislation.

The legislation officially defines Israel as the "national homeland of the Jewish people."

The law, which passed with a 62-55 backing, is defined as a "basic law," granting it quasi-constitutional status.

Palestinians, who have Israeli citizenship make up 21 percent of the population, are known as Arab-Israelis and have members in the Knesset.