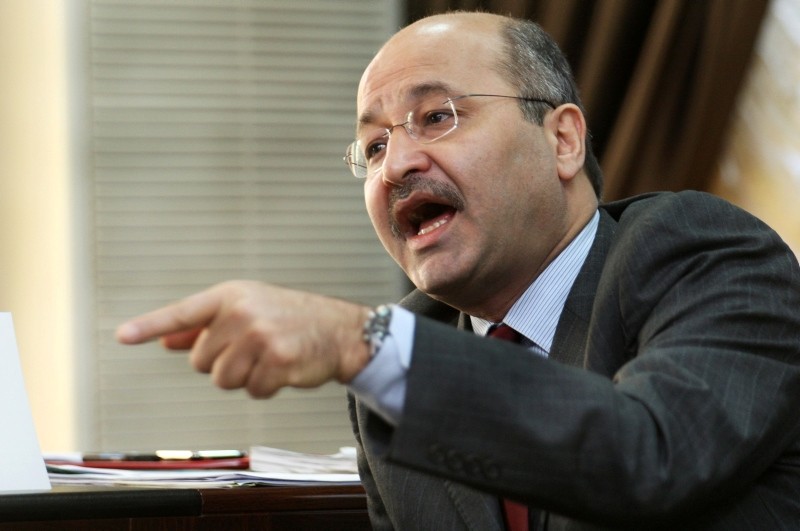 In this file photo taken on December 28, 2008, Iraq's then-deputy premier Barham Saleh speaks during an interview with AFP at his office in the capital Baghdad. (AFP Photo)
by Associated Press Oct 02, 2018 12:00 am
Iraq's parliament elected a veteran politician as the country's new president on Tuesday, a step toward forming a new government nearly five months after national elections.

State TV said Barham Salih, of the Patriotic Union of Kurdistan, won 220 votes out of the 273 lawmakers who attended Tuesday's session. He was among 20 candidates for the post, including one from the rival Kurdistan Democratic Party. The two parties have dominated Kurdish politics for decades.

Under an unofficial agreement dating back to the 2003 U.S.-led invasion, Iraq's presidency — a largely ceremonial role — is held by a Kurd, while the prime minister is Shiite and the parliament speaker is Sunni.

Iraq held elections in May 12. The new president will have 15 days to task the nominee of the largest parliamentary bloc with forming a new government. The prime minister-designate will then have 30 days to submit his cabinet to parliament.

Shiite lawmaker Hamid al-Moussawi said the lawmakers were supposed to vote Monday, but delayed the session for nearly 24 hours after the KDP and the PUK were unable to agree on a candidate. The parliament speaker eventually decided to hold a vote among all 20 nominees.

The KDP's nominee was Fuad Hussein, who served as chief of staff for the former Kurdish regional president Masoud Barzani.

Born in 1960 in the northern city of Sulaimaniyah, Salih joined the PUK in 1976 and later worked in its foreign relations department in London. He studied at Cardiff University and the University of Liverpool.

He held various posts in the Iraqi government after the 2003 invasion, including planning minister and deputy prime minister, and from 2009 to 2011 he served as prime minister of the Kurdish region.

Last year, he broke away from PUK following the death of the party's founder, Jalal Talabani, a former Iraqi president. Salih formed an opposition party, but returned to the PUK to be its nominee for president.

Two Shiite-led blocs have emerged since the May elections, both of which claim to have the most seats and therefore the right to form a government. One is led by the current prime minister, Haider al-Abadi, and includes supporters of the populist Shiite cleric Muqtada al-Sadr, whose followers won the most votes in the election. The other bloc includes state-sanctioned militias, many of which are backed by Iran, as well as former Prime Minister Nouri al-Maliki.

Political wrangling among the Shiite-led blocs and other factions could further delay the process of naming a prime minister.