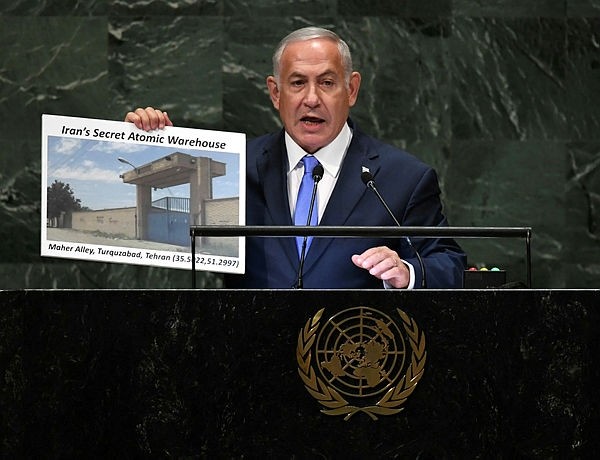 Israeli Prime Minister Benjamin Nethanyahu on Monday denied any involvement in the attack that killed at least 24 people in the southwest Iranian city of Ahvaz on Sept. 22.

In Nethanyahu's official statement that was released after Iran's Revolutionary Guard Corps launched ballistic missiles into eastern Syria, he said that "Iran's attempt to tie Israel to the terrorist attack in southern Iran is ridiculous."

He also commented on the recent video released by BBC showing various slogans – such as "Death with Israel," "Down with the house of Saud" and "Death to Israel" – written on Iranian missiles that were reportedly launched Monday.

Nethanyahu said that the fact that the slogans were written on the missiles "proves everything."

Iran launched ballistic missiles into eastern Syria on Monday targeting militants that it blames for the recent attack at a military parade in Ahvaz. Tehran has blamed multiple enemies for the attack, including Israel, the U.S., Saudi Arabia and Daesh.

Iran's Revolutionary Guard said Monday that based on evidence from the Ahvaz attack, the "terrorists" in eastern Syria are supported and guided by the United States in line with "satanic" plans of the White House, the Zionist regime — Iranian parlance for Israel — and a regional power, a reference to Saudi Arabia.

Netanyahu at the U.N. General Assembly last week accused Iran of hiding nuclear-related material at a warehouse in Tehran, a claim Iran denies.