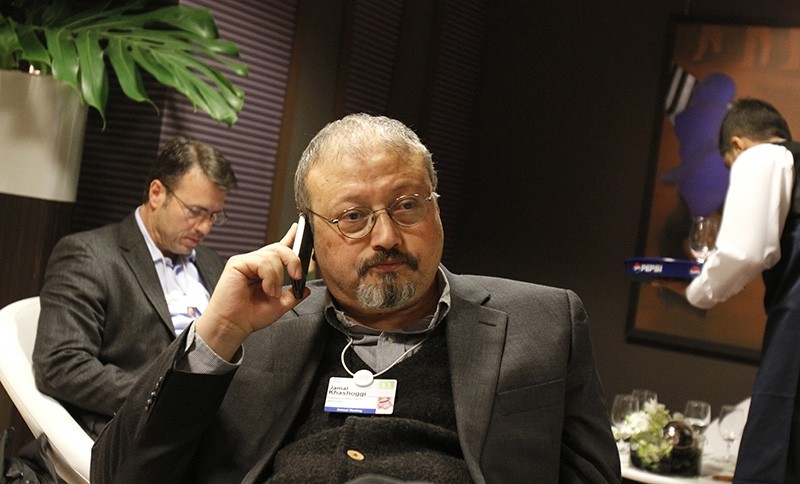 In this Jan. 29, 2011, file photo, Saudi Arabian journalist Jamal Khashoggi speaks on his cellphone at the World Economic Forum in Davos, Switzerland. (AP Photo)
by Daily Sabah with Agencies
Oct 03, 2018 12:00 am

A prominent dissident Saudi journalist and Washington Post columnist has gone missing after visiting his country's consulate in Istanbul on Tuesday, his friends and colleagues say.

Jamal Khashoggi, who had been living in self-exile in the United States, was told to return to the consulate on Tuesday after an initial visit last week to handle some family matters, Khashoggi's fiancee told a journalist at Arabi21 news.

"He entered at 1 p.m. and hasn't surfaced since then. I have no media statements to make at this point, but I have contacted Turkish authorities for help," his fiancee, a Turkish citizen who wished to remain unnamed, told Middle East Eye (MEE) by phone.

The fiancee said she waited for Khashoggi in the foreigners' hall for several hours until the consulate closed at 3 p.m. She then called the Turkish police to report Khashoggi's apparent disappearance.

Turkish police have opened an investigation into the incident, according to Al Jazeera.

Reuters quoted several senior Turkish officials Wednesday who said that Khashoggi is still inside the consulate building in Istanbul.

A Saudi official told Reuters on Wednesday that reports that Khashoggi has gone missing are "false."

The official said Khashoggi visited the consulate "to request paperwork related to his marital status and exited shortly thereafter."

Kalın said Turkish authorities were in contact with Saudi officials and he hoped the situation would be resolved.

Khashoggi's fiancee also denied the claim by the Saudi official.

"If this is true, where is he?" she said, adding that she or the Turkish police would have known if he had left the building.

The U.S. State Department said it had seen the reports on Khashoggi's disappearance and is "seeking more information," according to an email sent to MEE.

"We have been unable to reach Jamal today and are very concerned about where he may be," the Washington Post's international opinions editor Eli Lopez said in a statement Tuesday.

"We are monitoring the situation closely, trying to gather more information," Lopez reportedly told MEE in an email.

The 59-year-old Post columnist is a well-known critic of Crown Prince Mohammed bin Salman's reform program and the kingdom's policies toward Qatar and the war in Yemen.

Considered a Saudi nationalist, Khashoggi previously served as editor-in-chief at Saudi newspapers al-Arab and Watan, and as media adviser to Prince Turki al-Faisal during his term as ambassador in Washington and London.

He fled Saudi Arabia in 2017 and has been living in Washington over concerns about the Saudi government's crackdown on dissenting voices, particularly intellectuals and journalists.

A friend of Khashoggi said his visit to the consulate was in order to obtain proof of his divorce from his Saudi ex-wife required by Turkish authorities in order to marry his fiancee.

Khashoggi was reportedly a close figure close to billionaire investor Prince Alwaleed bin Talal, who was one of the most prominent names among the detainees. He launched a satellite news channel, Al-Arab, from Bahrain in 2015 with the backing of Talal, but the channel stayed on the air for less than 11 hours before being shut down.

While Salman has attracted attention with his modernization campaign to roll back some of the kingdom's ultraconservative societal regulations, rights groups say the government has ramped up its crackdown on activists and dissenters.

Khashoggi was also known for his interviews and travels with Osama bin Laden between 1987 and 1995, including in Afghanistan where he wrote about the battle against the Soviet occupation there. In the early 1990s, he also tried to persuade bin Laden to reconcile with the Saudi royal family and return home from his base in Sudan, but the al-Qaida leader refused.