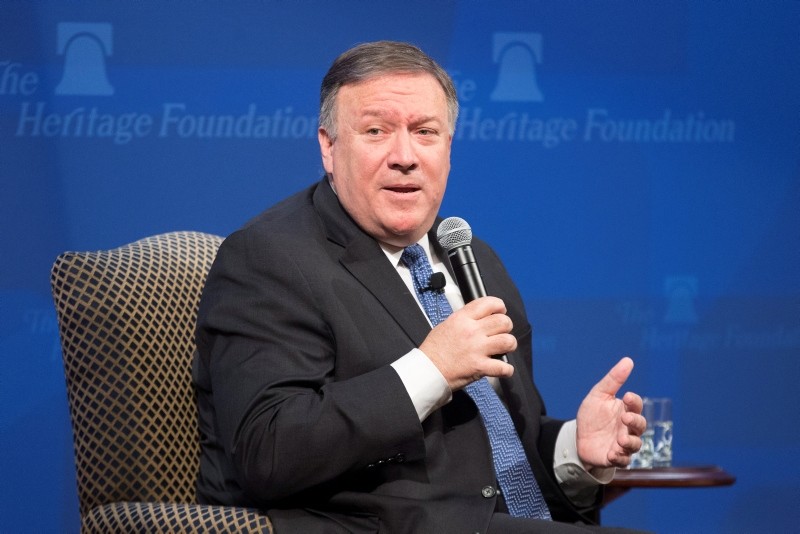 US Secretary of State Mike Pompeo participates in a discussion after delivering remarks, 'After the Deal - A New Iran Strategy', at the Heritage Foundation in Washington, DC, US, May 21, 2018. (EPA Photo)
by Compiled from Wire Services
Oct 03, 2018 12:00 am

The United States said Wednesday it was terminating a 1955 treaty reached with then ally Iran after Tehran cited it in an international court ruling against Washington's sanctions policy.

"I'm announcing that the U.S. is terminating the 1955 Treaty of Amity with Iran. This is a decision, frankly, that is 39 years overdue," Secretary of State Mike Pompeo told reporters at the State Department, referring to the date of the 1979 Islamic Revolution.

"Iran is attempting to interfere with the sovereign rights of the United States to take the lawful actions necessary to protect our national security, and Iran is abusing the ICJ for political and propaganda purposes," he said, referring to the International Court of Justice.

"Their case, as you can see from the decision, lacked merit."

The treaty, which was signed in Tehran, established consular and economic relations between the U.S. and Iran. It entered into force in 1957 after being ratified that same year.

Pompeo said Iran has been ignoring the treaty for "an awfully long time," and Washington "ought to have pulled out of it decades ago."

The U.S. and Iran severed diplomatic ties following Iran's 1979 revolution, but the treaty remained in effect.

Earlier Wednesday, the U.N.'s top court ordered the U.S. to lift sanctions on Iran that might hurt imports of humanitarian goods or services or adversely affect the safety of civil aviation.

The U.S. must "remove, by means of its choosing, any impediments arising from" the re-imposition of sanctions on medicines and medical devices, foodstuffs and agricultural commodities, and spare parts, equipment, and associated services needed for the safety of civil aviation, the court ruled.

Iranian Foreign Minister Javad Zarif hailed the ruling on Twitter, saying it is "another failure for sanctions-addicted USG [U.S. government] and victory for rule of law. Imperative for int'l community to collectively counter malign US unilateralism."

But Pompeo said the U.S. is "disappointed that the court failed to recognize that it has no jurisdiction to issue any order relating to these sanctions measures with the United States, which is doing its work on Iran to protect its own essential security interests."

Pompeo also blamed Iran on Wednesday for threats to American missions in Iraq. "Iran is the origin of the current threat to Americans in Iraq," he told reporters. "Our intelligence in this regard is solid. We can see the hand of the Ayatollah and his henchmen supporting these attacks on the United States."

The United States announced on Friday it will effectively close its consulate in the Iraqi city of Basra and relocate diplomatic personnel assigned there following increasing threats from Iran and Iran-backed militia, including rocket fire.

He also described Russian delivery of S-300 missile defense system to Syria as a "serious escalation."

In May, U.S. President Donald Trump unilaterally withdrew Washington from a 2015 landmark nuclear deal between Iran and the P5+1 group of nations -- the five permanent UN Security Council members plus Germany.

Ahead of the economic penalties, the six parties remaining in the Joint Comprehensive Plan of Action -- Britain, France, Germany, Russia, China and Iran -- announced the creation of a "Special Purpose Vehicle," which is intended to facilitate financial transactions with Iran allowed under the nuclear pact.

EU foreign policy chief Federica Mogherini said the system, which will be set up by EU member states, will allow "European companies to continue trade with Iran."

She said the financial mechanism "could be open to other partners in the world."

The treaty on economic relations and consular rights was signed in the aftermath of leftist and nationalist Prime Minister Muhammad Mossadegh's ouster by a CIA-backed coup.