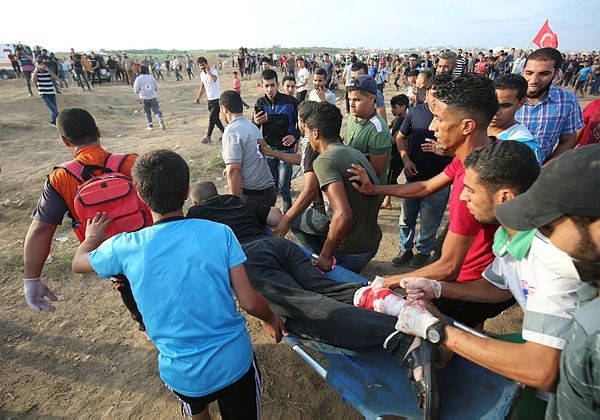 Palestinian paramedics carry a wounded protester during clashes with Israeli forces east of Gaza city, along the Gaza-Israel border in the Gaza Strip on October 5, 2018. (AFP Photo)
by French Press Agency - AFP
Oct 05, 2018 12:00 am

Two Palestinians, including a 14-year-old boy, were killed Friday on the Gaza border by Israeli forces during protests.

A further 142 people were wounded, including five in a critical condition, he added.

Qudra did not detail how many of those hurt were shot and how many suffering from the affects of tear gas.

The Israeli military said around 20,000 Palestinians took part in Friday's protests at numerous points along the Gaza border, continuing a series of demonstrations which began in March.

Grenades, explosives and stones were launched at Israeli soldiers posted behind the barrier which separates Gaza from Israel, the military said.

Israeli forces responded with live fire and an aircraft also carried out two strikes in Gaza, the military said.

The armed forces said it could not immediately comment on the circumstances surrounding the deaths of the two Palestinians, when asked by AFP.