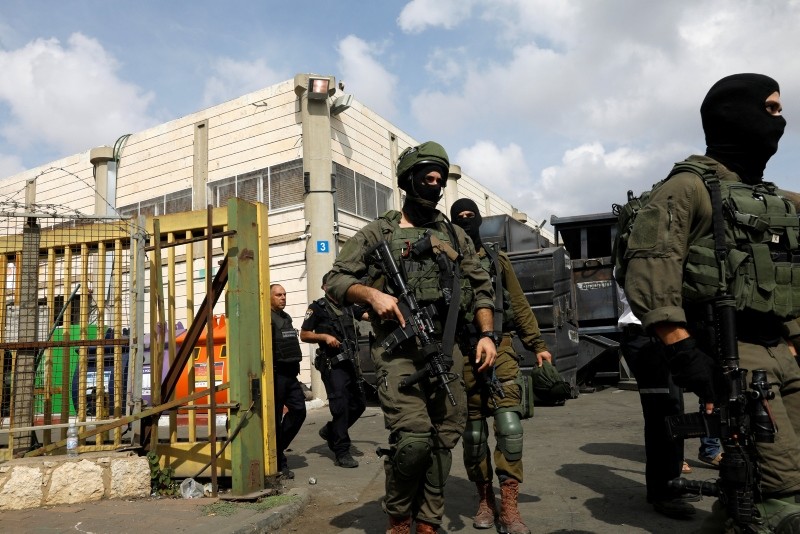 Israeli soldiers patrol near the scene where, according to Israeli media, a Palestinian shot and wounded three Israelis, at an industrial park adjacent to a Jewish settlement in the occupied West Bank October 7, 2018. (Reuters Photo)
by Compiled from Wire Services Oct 07, 2018 12:00 am

A Palestinian gunman shot two Israelis and wounded a third early Sunday in the Barkan industrial zone, next to a Jewish settlement in the occupied West Bank, the Israeli military said.

The suspect, a 23-year-old Palestinian, had a permit to work in the industrial zone, army spokesman Jonathan Conricus said, adding that Israel is treating the incident as a terrorist attack.

The assailant, the military said, had worked in a factory where the shooting took place.

Israel's national ambulance service said a man and two women were shot in the attack in area, where nearly 5,000 Palestinians are employed in Israeli-owned businesses.

A military spokesman, in a conference call with foreign journalists several hours after the incident, said the man and one of the women had died of their wounds.

The other woman shot in the incident was taken to hospital, where doctors said her injuries were not life-threatening.

"I am certain that they will apprehend him and I am also certain that we will deal with him to the fullest extent of the law and quickly," Prime Minister Benjamin Netanyahu said at the start of his weekly cabinet meeting in Jerusalem.

Hamas, the militant group that controls the Gaza Strip - the other main Palestinian territory - called the attack a "heroic operation."

The Barkan industrial zone in the northern West Bank employees thousands of Israelis and Palestinians.

Advocates of Israeli settlement policies say the industrial zones are an example of the benefits Palestinians have under Israeli control, including much-needed employment to Palestinians.

Critics - many of whom have pushed to boycott the industrial zones - say Israel is taking advantage of a vulnerable workforce and a Palestinian economy crippled by Israeli restrictions.

Israeli captured the West Bank in the 1967 Six-Day War.