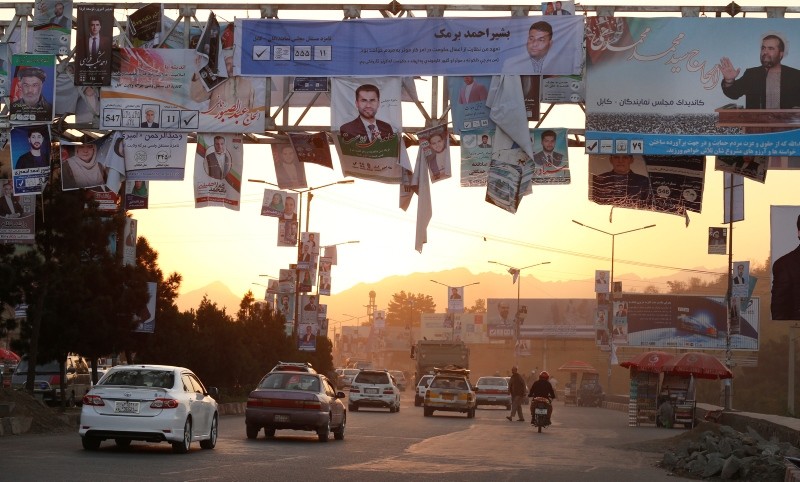 Campaign posters of candidates for the upcoming parliamentary election are installed on a light pole in downtown Kabul, Afghanistan, 06 October 2018. (EPA Photo)
by Compiled from Wire Services
Oct 08, 2018 12:00 am

The Taliban vowed Monday that they will target Afghan security forces in the upcoming parliamentary elections as Afghan leaders meet with U.S. peace envoy to discuss peace talks.

Describing the polls as a "malicious American conspiracy," Taliban spokesman Zabihullah Mujahid said the militants would pull no punches to disrupt the long-delayed ballot scheduled for Oct. 20.

"People who are trying to help in holding this process successfully by providing security should be targeted and no stone should be left unturned for the prevention and failure" of the election, Mujahid said in a statement published in English.

The Taliban -- Afghanistan's largest militant group that was toppled from power in the 2001 U.S.-led invasion -- typically issue inflammatory and hyperbolic statements about the Afghan government and its international backers.

But this latest declaration comes just days before the parliamentary election, which is seen as a crucial dry run for next year's presidential vote and has already been marred by deadly violence.

It also comes as Khalilzad meets with Afghan leaders for the first time since his appointment last month to steer peace efforts with the militants.

"We believe if more attention is paid to the (peace) process, there is a good chance of success," Abdullah said.

Khalilzad -- a high-profile former U.S. ambassador to Kabul, Baghdad and the United Nations -- is on a 10-day regional trip that also includes Pakistan, the United Arab Emirates, Saudi Arabia and Qatar.

He met with President Ashraf Ghani and other top leaders on Sunday night to discuss "an Afghan-led and Afghan-owned peace process," Ghani's office said in a statement.

Afghan and international players have been ratcheting up efforts to hold talks with the Taliban.

An unprecedented ceasefire in June followed by talks between U.S. officials and Taliban representatives in Qatar in July fueled hopes that negotiations could bring an end to the fighting.

But a wave of violence involving the Taliban and Daesh in recent months has poured cold water on the nascent optimism.

At least 20 others were wounded in the overnight assaults on police checkpoints, Abdul Hai Hayat, the head of the Jawzjan provincial council, said Monday.

The militants came from the neighboring provinces of Faryab and Sar-e Pul, Hayat said.

Taliban spokesman Zabiullah Mujahid confirmed the attack in a tweet and gave the same casualty toll.