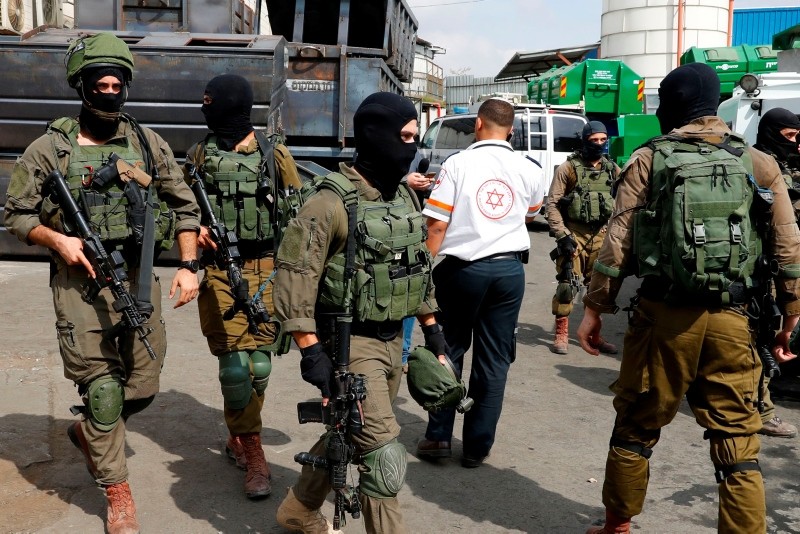 Israeli security forces gather at the site of a reported attack at the Barkan Industrial Park near the Israeli settlement of Ariel in the occupied West Bank on October 7, 2018. (AFP Photo)
by Anadolu Agency Oct 09, 2018 12:00 am

An Israeli military force raided Shawbka neighborhood in the city of Tulkarem and detained Wafaa Naalwa, 45, and her two daughters at their home, the residents said.

"Israeli soldiers searched Naalwa's family and questioned her family members before withdrawing from the area," one of the residents said.

There was no comment from the Israeli military on the arrests.

On Monday, Israeli forces briefly arrested the sister of the suspected shooter in the West Bank city of Nablus for questioning.

On Sunday, two Israelis were killed and another was injured in a shooting attack in an industrial area near the settlement of Barkan in the central West Bank.

The shooter had fled the scene unscathed.

Israeli media said the attacker was a former Palestinian worker from Tulkarem.

The individuals were arrested for "suspected involvement in popular terrorist activities," the army said in a statement, without elaborating on the nature of these activities.

According to Palestinian figures, some 6,500 Palestinians continue to languish in Israeli detention facilities, including scores of women and hundreds of minors.