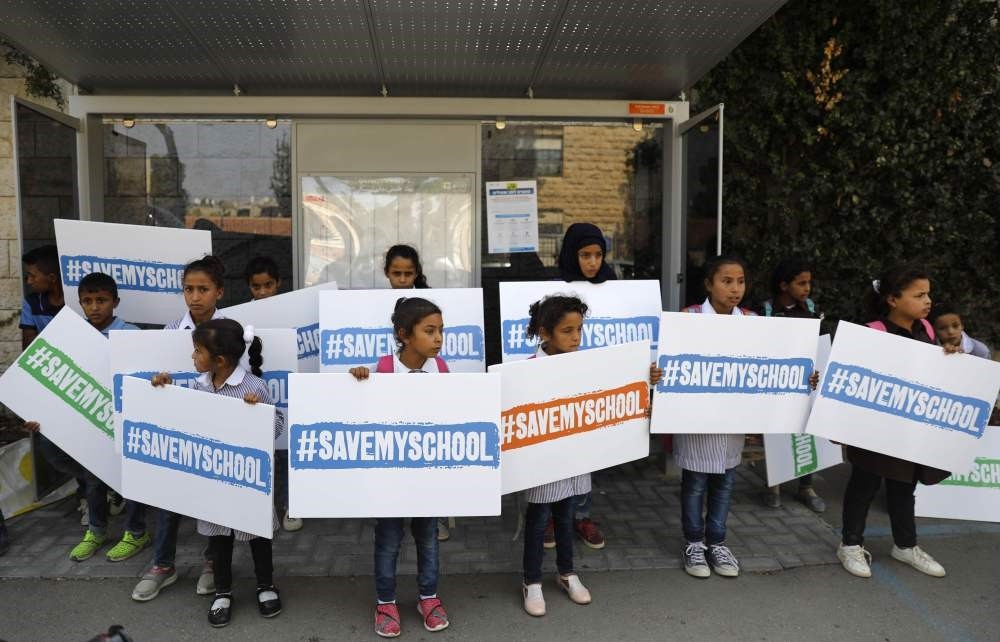 Children from the West Bank Bedouin village of Khan Al Ahmar hold signs with the slogan ,Save my school,, Oct. 4.
by Compiled from Wire Services
Oct 11, 2018 12:00 am

As many Palestinian schools faced demolition by Israeli forces, another school in the occupied West Bank was targeted by a group of Jewish settlers, injuring at least one Palestinian student

A group of Jewish settlers on Wednesday attacked a boys' school in the Palestinian village of Ourif near the West Bank city of Nablus, according to a local official. "Scores of Jewish settlers from the nearby Yitzhar settlement attacked the school with stones," Ghassan Daghlas, a Palestinian official in charge of settlement affairs, told Anadolu Agency (AA). "The settlers were backed by Israeli troops who fired rubber bullets and teargas to disperse the students," Daghlas said. According to the official, at least one Palestinian student was injured after being struck by a rubber bullet.

Palestinian schools have long been subjected to Israeli violence. A Palestinian school in the Palestinian village of Khan al-Ahmar has faced demolition, along with the adjacent Bedouin village in the occupied West Bank. In February, the U.N. Office for the Coordination of Humanitarian Affairs (OCHA) said that at least 45 schools in Palestine were facing the threat of destruction by the Israeli authority. In a statement, the OCHA acting coordinator for the occupied Palestinian territories, Roberto Valent, pointed out that a Palestinian school in east Jerusalem was destroyed by Israeli soldiers, and added: "The demolition was carried out on the grounds of a lack of Israeli-issued permits, which are nearly impossible to obtain."

Amid escalating violence against Palestinians, scores of Jewish settlers yesterday morning vandalized a dozen private vehicles in the Palestinian village of Karyout in the Israeli-occupied West Bank, Ghassan Daghlas, a Palestinian official in charge of settlement affairs, told AA. Jewish settlers, he added, had recently stepped up their attacks on Palestinian villages, since the region's farmers are currently busy harvesting their olive crops. Olive production, from an estimated 27 million olive trees, represents a primary source of income for over 100,000 Palestinian families in the West Bank.

Settlements are one of the most heated issues in efforts to restart Israeli-Palestinian peace talks, frozen since 2014. The international community regards all Israeli settlements in occupied Palestinian territories to be illegal and a major obstacle to Middle East peace. The area, captured by Israel in 1967, is not sovereign Israeli territory and Palestinians there are not Israeli citizens and do not have the right to vote. Some 500,000 Israelis live in the West Bank and East Jerusalem, areas that are also home to more than 2.6 million Palestinians. Palestinians have long argued that Israeli settlements could deny them a viable and contiguous state.

During a U.N. Security Council meeting last month, Special Coordinator for the Middle East Nickolay Mladenov briefed council members on the current status of the Israeli-Palestinian conflict. "All settlement activities are a violation of international law," he said, as reported by Agence France-Presse (AFP). Around 2,800 housing units in the occupied territories of the West Bank were approved by the Israeli government, according to Mladenov. Meanwhile, 117 Palestinian homes were either demolished or seized by Israel in the West Bank and East Jerusalem, resulting in 145 Palestinians being displaced.