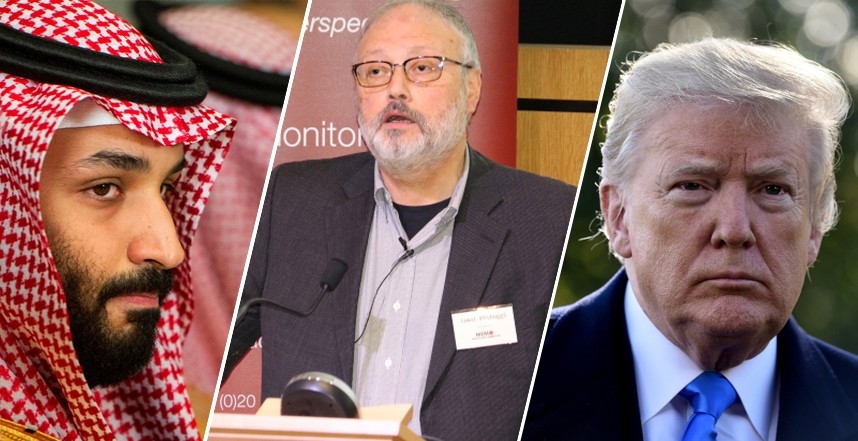 Saudi Arabia on Sunday dismissed threats of sanctions over the disappearance of Washington Post journalist Jamal Khashoggi and vowed the oil-rich kingdom would retaliate against such action.

"The kingdom affirms its total rejection of any threats and attempts to undermine it, whether through economic sanctions, political pressure or repeating false accusations," the kingdom's statement said. "The kingdom also affirms that if it is (targeted by) any action, it will respond with greater action."

The statement came after the Tadawul exchange in Riyadh dropped by 7 percent at one point during the week's first day of trading, with 182 of its 186 listed stocks showing losses by the early afternoon. The market clawed back some of the losses, trading down over 4 percent later on.

"We're going to get to the bottom of it and there will be severe punishment," Trump told CBS's "60 Minutes" program, according to an extract of an interview that was released on Saturday.

"As of this moment, they deny it and they deny it vehemently. Could it be them? Yes," Trump said in the interview, which was conducted on Thursday, when asked if Khashoggi was murdered by Saudi Arabia.

Trump added the matter was especially important "because this man was a reporter."

But when asked what options Trump would consider, the president said he was not keen to limit arms sales to the kingdom — a position he has previously voiced.

"Well, it depends on what the sanction is," he said.

"I'll give you an example — they are ordering military equipment. Everybody in the world wanted that order. Russia wanted it, China wanted it, we wanted it. We got it, and we got all of it, every bit of it.

He added: "I'll tell you what I don't want to do. Boeing, Lockheed, Raytheon, I don't want to hurt jobs. I don't want to lose an order like that. And you know what, there are other ways of punishing, to use a word that's a pretty harsh word, but it's true."

Turkish officials say they fear Saudi agents killed and dismembered Khashoggi after he entered the consulate, saying they have audio and video recordings of it that they have not released. The kingdom has called the allegations "baseless," but has offered no evidence the writer ever left the consulate.

Saudi Crown Prince Mohammed bin Salman has aggressively pitched the kingdom as a destination for foreign investment. But Khashoggi's disappearance, and suspicions he may have been targeted over his criticism of the crown prince, have led several business leaders and media outlets to back out of an upcoming high-profile investment conference in Riyadh.

Khashoggi, who was considered close to the Saudi royal family, had become a critic of the current government and Prince Mohammed, the 33-year-old heir apparent who has shown little tolerance for criticism.

Those policies are all seen as initiatives of the crown prince, who has also presided over a roundup of activists and businessmen.