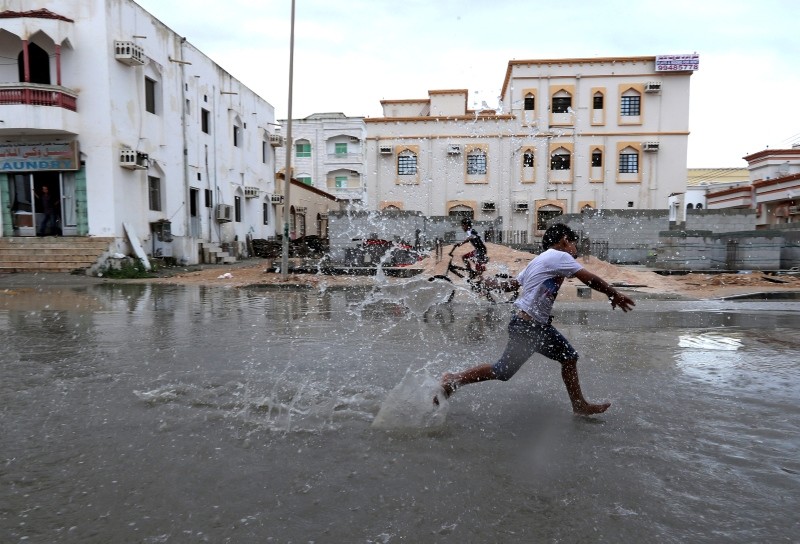 Children from a local neighbourhood play in a roadside puddle accumulated from rain brought by Cyclone Luban in Salalah, Oman, October 13, 2018. (Reuters Photo)
by Compiled from Wire Services Oct 15, 2018 12:00 am

"Heavy rains and floods have left more than 100 people injured while one person was missing," Issa al-Qumeiri told Anadolu Agency.

He said 150 houses were damaged while more than 2,000 families were evacuated since Cyclone Luban hit the province Sunday.

"The province has become a disaster zone," he said, calling on the Yemeni government and international organizations to provide emergency relief to residents.

"There is widespread infrastructure damage in the area," he said.

Governor of Mahra, Rageh Bakreet, posted on Facebook images of men standing on top of their buildings in the governorate of Mahra in eastern Yemen, after Luban made a strong landfall.

Bakreet describes the situation as "disastrous" and says the only way to rescue the families is by airlift. He adds that "the situation surpasses our humble capabilities."

The governor has ordered all government offices and schools to shut temporarily amid power outages across most of Ghaida.

This is the fifth time the tropical storm struck Yemen since 2015.

Impoverished Yemen has remained wracked by violence since 2014, when Shia Houthi rebels overran much of the country, including capital Sanaa.