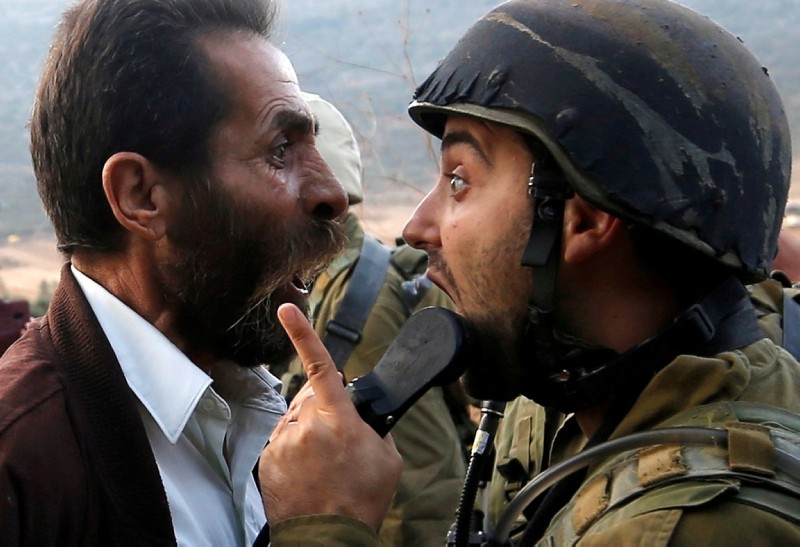 A Palestinian man argues with an Israeli soldier during clashes over an Israeli order to shut down a Palestinian school near Nablus in the occupied West Bank, Oct. 15, 2018. (Reuters Photo)
by Compiled from Wire Services
Oct 15, 2018 12:00 am

The Israeli army on Monday used rubber bullets and tear gas canisters to disperse Palestinian students and officials defying an Israeli order to close a school in the West Bank city of Nablus.

On Sunday, Israeli authorities ordered the closure of the Al-Laban-Al-Zawiya school in Nablus on the pretext that students had hurled stones at Israeli soldiers and settlers.

Despite the order, students and local officials attempted to reopen the school, prompting Israeli forces to use rubber bullets and tear gas canisters to disperse them.

Municipal council chief Samer Eweis was injured by a rubber bullet and AFP photojournalist Jaafar Ashtiyeh was hospitalized after being hit in the head by a gas canister, according to an Anadolu Agency correspondent.

Dozens of Palestinians students also suffered temporary asphyxiation after inhaling tear gas fired by Israeli forces and were treated on the spot.

The Ramallah-based Palestinian government decried the Israeli closure order as a "new aggression on the Palestinian education."

"Any attempt to harm the school is a blatant aggression against the educational process and an attack on international law and regulations that guarantee the right to education and knowledge," government spokesman Yousef al-Mahmoud said in a statement.

He called for an urgent international action to stop the Israeli behavior.

The Al-Laban-Al-Sawiya school was attacked by settlers a few months ago and is constantly being attacked by the Israeli army, according to Palestinian residents.

In February, the U.N. Office for the Coordination of Humanitarian Affairs (OCHA) said that at least 45 schools in Palestine were facing the threat of destruction by the Israeli authority. In a statement, the OCHA acting coordinator for the occupied Palestinian territories, Roberto Valent, pointed out that a Palestinian school in east Jerusalem was destroyed by Israeli soldiers, and added, "The demolition was carried out on the grounds of a lack of Israeli-issued permits, which are nearly impossible to obtain."

Meanwhile, Israeli forces rounded up 22 Palestinians in overnight raids across the occupied West Bank, according to the Israeli military on Monday.

The individuals were arrested for "suspected involvement in popular terrorist activities," the army said in a statement, without elaborating on the nature of these activities.

According to Palestinian figures, some 6,500 Palestinians continue to languish in Israeli detention facilities, including scores of women and hundreds of minors.