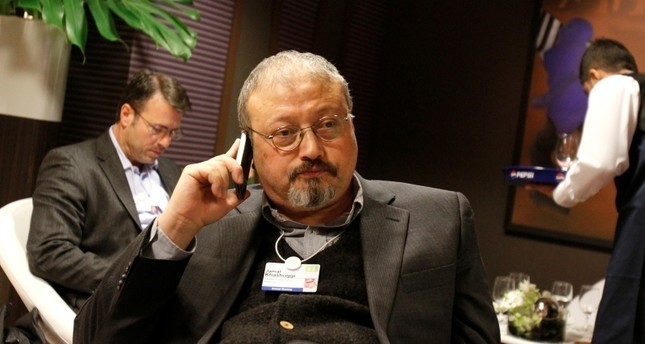 In this Jan. 29, 2011 photo, Saudi Arabian journalist Jamal Khashoggi speaks on his cellphone at the World Economic Forum in Davos, Switzerland. (AP Photo)
by Anadolu Agency Oct 16, 2018 12:00 am

Missing Saudi journalist Jamal Khashoggi's family called for an international inquiry into his disappearance, adding they are "sadly and anxiously" waiting for official word on his fate.

The family of missing Saudi journalist Jamal Khashoggi on Tuesday called for an international investigation into the circumstances of his disappearance.

"We are sadly and anxiously following the conflicting news regarding the fate of our father after losing contact with him two weeks ago, when he disappeared after entering the Saudi consulate in Istanbul," the family said in the a statement.

"Our family is traumatized, and yearns to be together during this painful time."

"The strong moral and legal responsibility which our father instilled in us obliges us to call for the establishment of an independent and impartial international commission to inquire into the circumstances of his death," his family said.

Khashoggi has long been feared killed at the consulate after he entered on Oct. 2 and was never seen exiting.

U.S. President Donald Trump raised the possibility that "rogue killers" could have been responsible for Khashoggi's disappearance after speaking over the telephone with Saudi King Salman for 20 minutes on Monday.

On Monday, Turkish and Saudi officials arrived at the Saudi consulate in Istanbul for a joint probe into Khashoggi's case.

On the same day Khashoggi arrived at the consulate, 15 other Saudis, including several officials, arrived in Istanbul on two planes and visited the building while journalist was also inside, police sources said. All of the identified individuals have since left Turkey.

Saudi authorities have yet to give a clear explanation of Khashoggi's fate, while several countries -- particularly Turkey, the U.S., and the U.K -- are pressing the case to be cleared up as soon as possible.