4 Palestinians injured in clashes with Israeli forces at Bedouin village 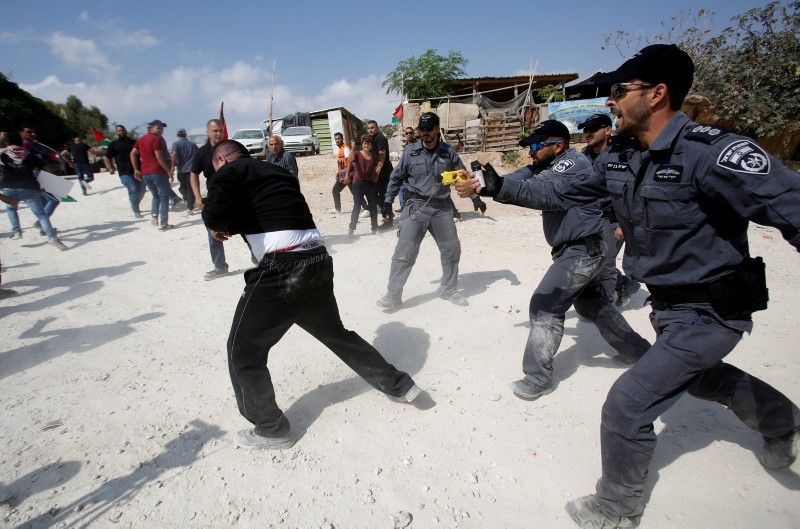 Israeli policemen disperse activists in the Palestinian Bedouin village of Khan al-Ahmar that Israel plans to demolish, in the occupied West Bank October 17, 2018. (Reuters Photo)
by Anadolu Agency
Oct 17, 2018 12:00 am

Four Palestinians were wounded after clashes erupted with Israeli soldiers in East Jerusalem Wednesday, the Palestinian Red Crescent Society said in a statement.

According to eyewitnesses, an Israeli military force -- accompanied by bulldozers -- approached the Bedouin village of Khan al-Ahmar on Wednesday morning, triggering clashes with local Palestinian youth and several foreign activists.

"Israeli troops beat the Palestinians and activists and attacked them with teargas," one witness told Anadolu Agency.

"They also arrested an 18-year old Palestinian girl, Ranin Amira, whisking her off to an unknown location," the witness, preferring anonymity, added.

Israel seeks to expel some 10,000 Bedouin residents of what is known as the E1 Zone, which sits on 15 square kilometers of land (5.8 square miles) in East Jerusalem.

The planned demolition is meant to make way for a series of Jewish-only housing units linking Jerusalem to the Maale Adumim settlement.

If carried out, the plan would effectively cut the West Bank in two, preempting the possibility of a territorially-contiguous Palestinian state based on pre-1967 borders.

There are 46 Bedouin communities -- inhabited by roughly 3,000 residents -- scattered across Israeli-occupied East Jerusalem.

Under the 1995 Oslo Accord between Israel and the Palestinian Authority (PA), the West Bank -- including East Jerusalem -- was divided into Areas A, B and C.