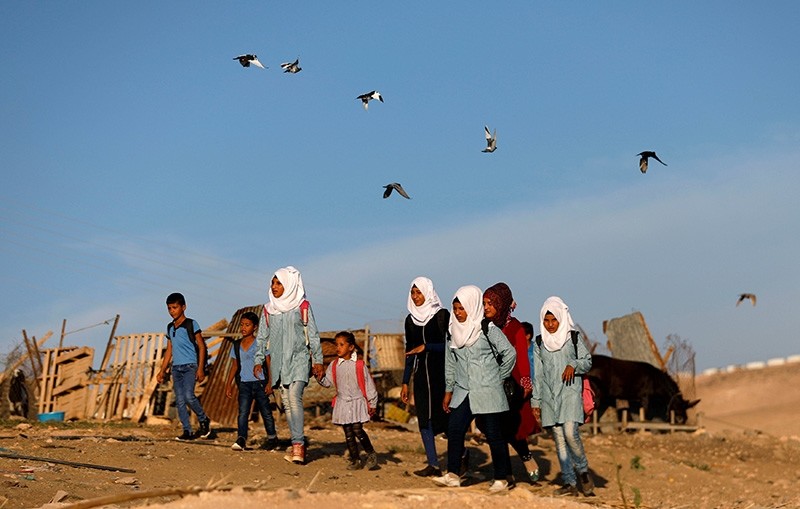 Palestinian students make their way to school in the Palestinian Bedouin village of Khan al-Ahmar that Israel plans to demolish, in the occupied West Bank Oct. 16, 2018. (Reuters Photo)
by Oct 21, 2018 12:00 am

Israel said Sunday it would put on hold for "a number of weeks" its threatened razing of a Bedouin village in the occupied West Bank amid international calls to drop the plan, saying it would try to negotiate an evacuation.

The decision was announced after a meeting of Prime Minister Benjamin Netanyahu's security cabinet.

Israel, which has long sought to clear the Arab nomads from tracts of land between the Jewish settlements of Maale Adumim and Kfar Adumim, has said the hamlet of Khan al-Ahmar was built without the required permits.

Palestinians, who lost an Israeli Supreme Court appeal against the evacuation, say such documents are impossible to obtain.

The European Union and the United Nations have urged Israel to abandon the plan to demolish Khan al-Ahmar and relocate its 180 residents to an area about 12 km (seven miles) away next to a landfill in the West Bank.

Foreign pressure was ramped up on Wednesday when the International Criminal Court prosecutor said in a statement about Khan al-Ahmar that population transfers in occupied territory constitute war crimes. Israel captured the West Bank in a 1967 war.

"The security cabinet is allowing an extension of a number of weeks for negotiations on a consensual evacuation to be exhausted," the Israeli statement said.

Israeli authorities have been expected to send in bulldozers at any time after an Oct. 1 deadline for the villagers to demolish their own homes expired. Foreign activists have flocked to the site.

In remarks to reporters earlier on Sunday, Netanyahu echoed a statement on Saturday by an official in his office who said the eviction had been postponed and an alternative relocation plan was being considered, in coordination with the Palestinian Authority.

But Netanyahu said the demolition would not be delayed indefinitely.

The Palestinian Foreign Ministry, commenting on those remarks in statement, dismissed the postponement as "nothing more than an Israeli attempt to calm foreign and local criticism."

Palestine says razing Khan al-Ahmar's tents and tin shacks is part of an Israeli plan to create an arc of Jewish settlements that could effectively cut off East Jerusalem from the West Bank, areas occupied by Israel since a 1967 war.

Most countries consider settlements built by Israel on land it captured in 1967 as illegal and say they reduce and fragment the territory Palestinians seek for a viable state. Israel disputes this.