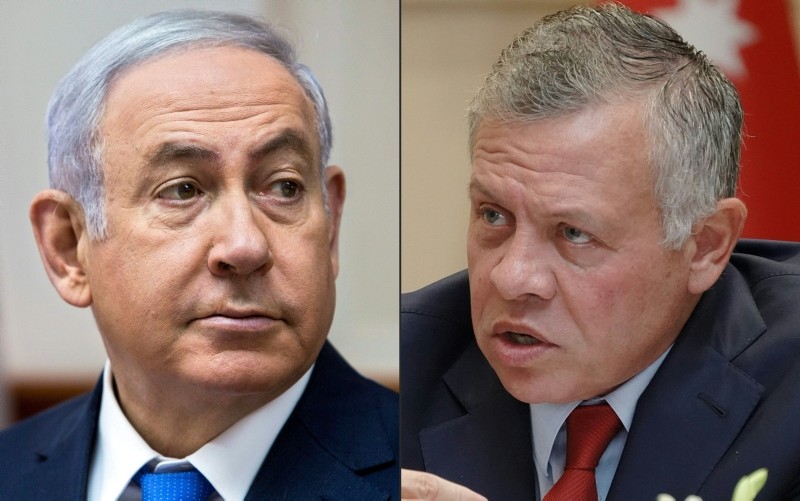 Israeli Prime Minister Benjamin Netanyahu (L) and Jordanian King Abdullah II (R) (AFP Photo)
by Oct 21, 2018 12:00 am
Jordan told Israel on Sunday it would not renew a 25-year lease of two tracts of territory along its border, where Israel had certain rights under a 1994 peace treaty, but Israel said it would negotiate with Jordan to extend the lease.

Under the treaty, Israel retained private land ownership and special travel rights in Baquora in the northwestern part of the kingdom and Ghumar in the south.

King Abdullah, who has been under increasing public pressure to end the leasing arrangements with Israel, told senior politicians the kingdom wanted to exercise its "full sovereignty" over the two areas, Petra state news agency said.

Prime Minister Benjamin Netanyahu said on Sunday his country will negotiate with Jordan an extension of the 25-year lease.

Netanyahu, in public remarks, said Jordan wants to implement its option to end the lease, and Israel "will enter negotiations with it on the possibility of extending the current arrangement".

Under an annex to the peace agreement, Israel leased about 1,000 acres (405 hectares) of agricultural land in the southern sector of its border with Jordan, as well as a small area known as the "Island of Peace" near the Sea of Galilee.

The 25-year lease expires next year.

Under the terms of peace treaty, the lease would be automatically renewed unless either of the parties notified the other a year before expiry that it wished to terminate the agreement, according to a Foreign Ministry statement.