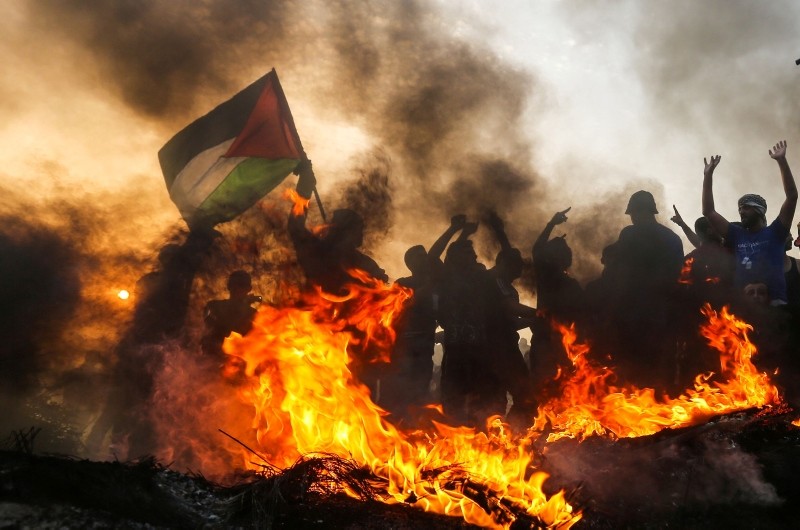 A Palestinian waves a national flag during a demonstration on the beach near the maritime border with Israel, in the northern Gaza Strip, on October 22, 2018. (AP Photo)
by Oct 23, 2018 12:00 am

A 17-year-old Palestinian teenager was shot dead by Israeli troops during a border clash on Tuesday, a health ministry in Gaza said in a statement.

It named him as Muntaser Mohammed al-Baz, saying he was shot in the head earlier during protests near Bureij in central Gaza and died of his wounds in hospital.

An Israeli army spokeswoman told AFP that troops at the border fence opened fire during a violent protest by about 200 Palestinians.

"Troops responded with riot dispersal means and gunfire according to the rules of engagement," she added.

Near daily protests along the Gaza border since March 30 against Israel's crippling 11-year blockade of the impoverished enclave have sparked repeated clashes with the army.

More than 200 Palestinians and one Israeli have been killed in the violence.

Last week a rocket from the Palestinian territory hit a home in southern Israel, prompting the Jewish state to strike 20 Hamas targets in Gaza.

Another rocket fell in the Mediterranean off Tel Aviv, without causing casualties or damage.

Hamas disavowed the rocket launches and said it was investigating the incident.

An Egyptian security delegation that visited Gaza on Thursday encouraged Hamas leader Ismail Haniya to rein in the protests, according to an Egyptian official.

Hamas has fought three wars with Israel since 2008 and fears of a fourth have spurred efforts by Egypt and the United Nations for a wider deal that would see Israel ease its blockade in exchange for a long-term truce with the Islamists.