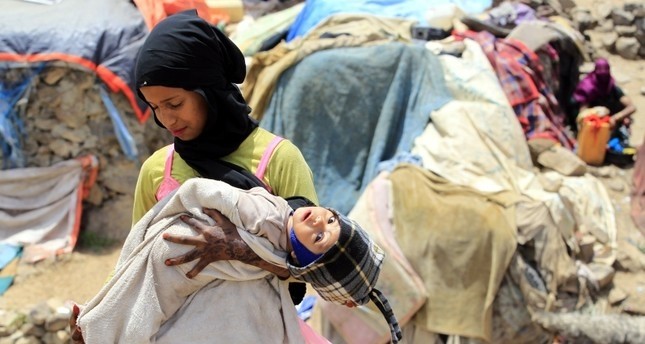 A displaced Yemeni girl holds her infant sister outside temporary shelters at a camp for Internally Displaced Persons (IDPs) on the outskirts of Sana'a, Yemen, 25 August 2018. (EPA Photo)
by Compiled from Wire Services Oct 23, 2018 12:00 am

As the Saudi coalition’s attacks further fuel the humanitarian crisis in the war-torn country, Yemen is in danger of being engulfed by an “imminent and great big famine,” the U.N.’s relief chief warned

The United Nations aid chief sounded the alarm at the U.N. Security Council late Tuesday that half the population of war-torn Yemen, some 14 million people, could soon be on the brink of famine and completely relying on humanitarian aid for survival.

"There is now a clear and present danger of an imminent and great big famine engulfing Yemen: much bigger than anything any professional in this field has seen during their working lives," U.N. aid chief Mark Lowcock said, Reuters reported. He described the scale of what was being faced in Yemen as "shocking" given that only two famines had been declared in the world in the past 20 years – Somalia in 2011 and a localized famine in South Sudan last year.

Yemen has been wracked by conflict since 2014, when Shiite Houthi rebels overran much of the country. Saudi Crown Prince Mohammed bin Salman, the former defense minister, and Saudi Arabia's allies launched Operation Decisive Storm in March 2015. Riyadh has accused the Houthi rebel group of serving as a proxy force for Iran, Saudi Arabia's arch enemy in the region.

In September, the Saudi-led coalition admitted that mistakes were made in an August airstrike that killed 40 children, an event considered an apparent war crime by the U.N. human rights body. The U.N. Human Rights Council urged the international community to "refrain from providing arms that could be used in the conflict" – an apparent reference to countries, including the United States and Britain, that help arm the Saudi-led coalition. The rare concession followed mounting international pressure to do more to limit civilian casualties in the three-and-a-half year civil war that has killed more than 10,000 people and pushed the already impoverished country to the brink of famine.

At the beginning of 2017, the United Nations and its partners were able to provide aid to 3 million hungry Yemenis. Since then, assistance has been scaled up, reaching 8 million people in September because of generous funding from donors, Lowcock said, but far below the 14 million people who may need it.

Lowcock said three conditions are required for famine to be declared: At least one in five households faces an extreme lack of food, more than 30 percent of children under age 5 are suffering from acute malnutrition, and at least two out of every 10,000 people are dying from hunger every day.

Last month, Lowcock said the food crisis had worsened because of the intensification of fighting around the key port of Hodeida, which is the lifeline for delivery of humanitarian aid and commercial imports that Yemenis rely on, and a "further collapse of the economy." Since then, he said, "fierce clashes continue in Hodeida, including intense fighting, shelling and airstrikes in Hodeida City over the last several days." Clashes have also blocked access to a facility where grain is milled that could feed 3.7 million people for a month, he said.