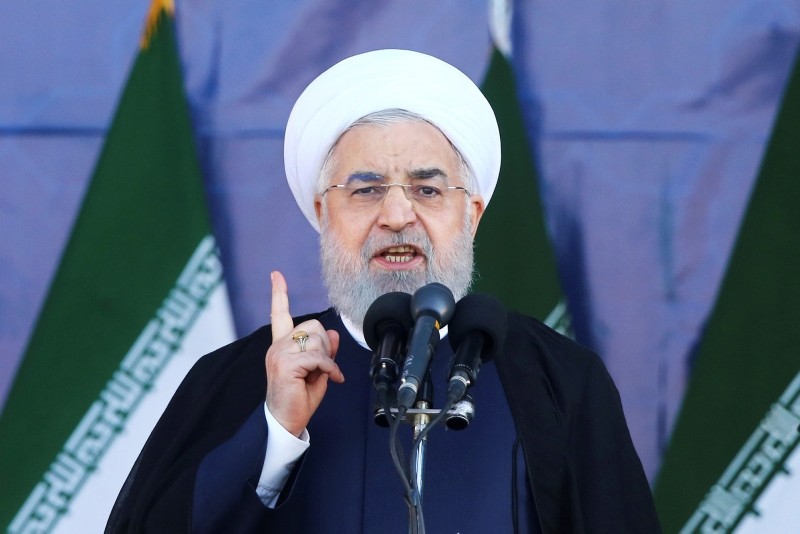 Iran's President Hassan Rouhani speaks at a military parade marking the 38th anniversary of Iraq's 1980 invasion of Iran, in front of the shrine of the late revolutionary founder, Ayatollah Khomeini, outside Tehran, Iran, Sept. 22, 2018. (AP Photo)
by reuters
Oct 24, 2018 12:00 am

Iranian President Hassan Rouhani said on Wednesday that Saudi Arabia would not have murdered prominent journalist Jamal Khashoggi without American protection, according to the Islamic Republic News Agency (IRNA).

U.S. President Donald Trump said on Tuesday Saudi authorities staged the "worst cover-up ever" in the killing of Khashoggi in Turkey this month, as Washington vowed to revoke the visas of some of those believed to be responsible.

"No one would imagine that in today's world and a new century that we would witness such an organized murder and a system would plan out such a heinous murder," Rouhani said, according to IRNA.

"I don't think that a country would dare commit such a crime without the protection of America."

Khashoggi's death in the Saudi consulate in Istanbul on Oct. 2 has triggered global outrage.

Saudi Arabia initially denied knowledge of Khashoggi's fate before saying on Saturday he was killed in a fight in the consulate, an account met with skepticism from several Western governments.

Iran and Saudi Arabia are regional rivals and have supported opposing sides in the conflicts in Syria and Yemen and different political factions in Iraq and Lebanon.

U.S. protection has allowed Saudi Arabia to carry out bombings against civilians in Yemen's war, Rouhani said, according to IRNA.

"If there was no American protection, would the people of Yemen still have faced the same brutal bombing?" Rouhani said.

Separately, Rouhani said that Iran would "defeat" new American sanctions targeting its oil sector, according to the IRIB news agency.

Washington plans to impose the sanctions from Nov. 4 with the aim of stopping Iran's involvement in conflicts in Syria and Iraq, and bringing Tehran to the negotiating table over its ballistic missile program.