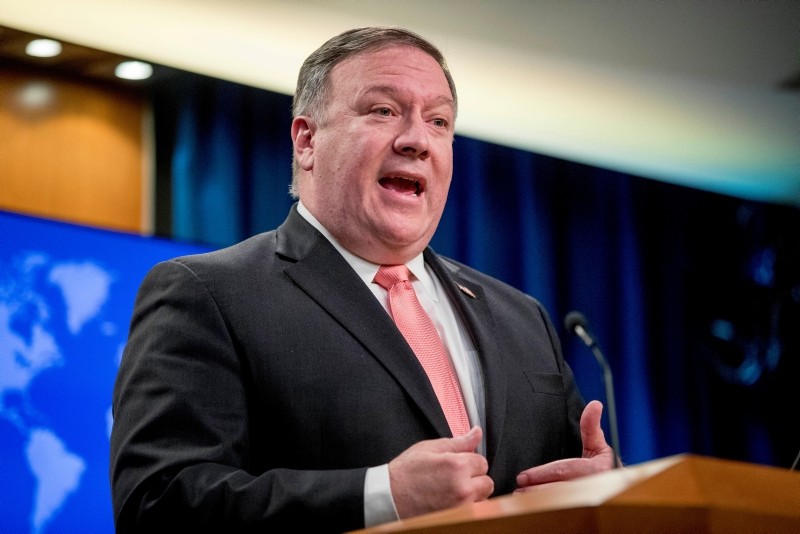 In this Oct. 23, 2018 photo, Secretary of State Mike Pompeo speaks to reporters at a news conference at the State Department in Washington. (AP Photo)
by Compiled from Wire Services Nov 04, 2018 12:00 am

U.S. Secretary of State Mike Pompeo said he was confident Iran will not restart its nuclear weapons program, speaking just a day before Washington is set to reimpose a slew of sanctions on Tehran.

The sanctions which snap back Monday were lifted in 2015 when Iran agreed to a multilateral nuclear deal meant to prevent Tehran from obtaining weapons of mass destruction.

Iran has stuck with the deal, but the U.S. pulled out unilaterally saying the agreement did not go far in enough to curtail Tehran's regional involvement, including support for Bashar Assad in Syria.

"We're confident that the Iranians will not make that decision," Pompeo said on broadcaster CBS on Sunday, when asked if Iran could go back to its old ways as a result of reinstated sanctions, which include Iran's oil sector.

Pompeo issued a specific warning to Europe, saying "European companies will not be permitted to do business with both the United States and with Iran."

The U.S. will issue waivers on Iranian oil to eight jurisdictions. China, India, Turkey and others in the Middle East and Asia are among Iran's biggest customers and are expected to be among those granted waivers.

Washington has said the European Union as a bloc will not get a waiver.

In an interview with "Fox News Sunday," Pompeo refused to reveal which countries received waivers from U.S. sanctions to continue importing Iranian oil. But he said the eight unidentified nations "need a little bit more time to get to zero." He would not rule out the Trump administration extending the waivers beyond six months.

Pompeo maintained that despite the waivers, "these sanctions have already had an enormous impact." He added that Trump's policy of "maximum pressure will be fully in place as of tomorrow."

Pompeo said the U.S. had already managed to reduce Iranian oil exports by a million barrels a day. According to production data, Iran was producing about 3.8 million barrels daily in 2017.

President Donald Trump removed the U.S. from the 2015 Iran nuclear deal earlier this year, triggering the sanctions being imposed Monday. Pompeo said they are designed to "alter the Iranian regime's behavior," especially its support of terrorist groups like Hezbollah.