150 dead in battle for Yemen's Hodeida amid growing international outcry 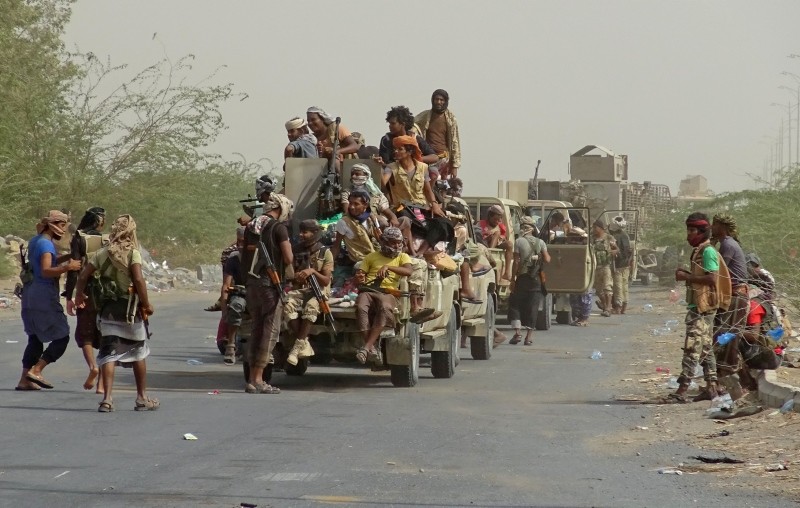 Yemeni pro-government forces gather on the eastern outskirts of Hodeida, Yemen, as they continue to battle for the control of the city from Houthi rebels, Nov. 9, 2018. (AFP Photo)
by Compiled from Wire Services Nov 12, 2018 12:00 am

Amid growing anger over civilian casualties from the Saudi-led coalition's air strikes, at least 150 people have been killed in 24 hours of clashes between government loyalists and rebels in Yemen's flashpoint city of Hodeida, medics and military sources said yesterday.

A military official in Hodeida on Monday confirmed seven civilians had died, without giving further details. Medics in hospitals across the city reported 110 rebels and 32 loyalist fighters killed overnight, according to a tally by French Press Agency (AFP).

Government loyalists supported by a Saudi-led coalition are fighting to oust the Iran-backed Houthi rebels from the Red Sea city, whose docks are a lifeline to 14 million Yemenis at risk of starvation.

Military sources confirmed that the Saudi-led alliance had targeted the rebels with multiple airstrikes.

"If the port at Hodeida is destroyed, that could create an absolutely catastrophic situation," UN Secretary General Antonio Guterres warned.

"The fighting must stop, a political debate must begin, and we must prepare a massive humanitarian response to avoid the worst next year," he added.

The Hodeida offensive has sparked international outcry unprecedented in nearly four years of conflict between the Houthis and the Saudi-backed government.

The United Kingdom, the United States and France have all called for a cessation to the hostilities. All three countries are major suppliers of arms to Saudi Arabia.

British Foreign Secretary Jeremy Hunt met with Saudi King Salman on Monday during a visit to the kingdom to press its rulers to support U.N. efforts to end the conflict.

Hunt will also meet senior officials from Yemen and the crown prince of the United Arab Emirates, a key pillar of the Saudi-led coalition supporting the Yemeni government, this week.

"There will be no victor in this war," Le Drian told France 2 TV.

For several weeks at the end of 2017, the Saudi coalition imposed a blockade on Yemeni ports that it said was to prevent Houthis from importing weapons. This had a severe impact on Yemen, which traditionally imports 90 percent of its food.

Yemen has been wracked by conflict since 2014, when Shiite Houthi rebels overran much of the country. Saudi Crown Prince Mohammed bin Salman, the former defense minister, and Saudi Arabia's allies launched Operation Decisive Storm in March 2015.

The Saudi and UAE-led war in Yemen has caused growing international unease after high-profile coalition air strikes killed scores of civilians, many of them children.

In September, the Saudi-led coalition admitted that mistakes were made in an August air strike that killed 40 children, an event considered a war crime by the U.N. human rights body.