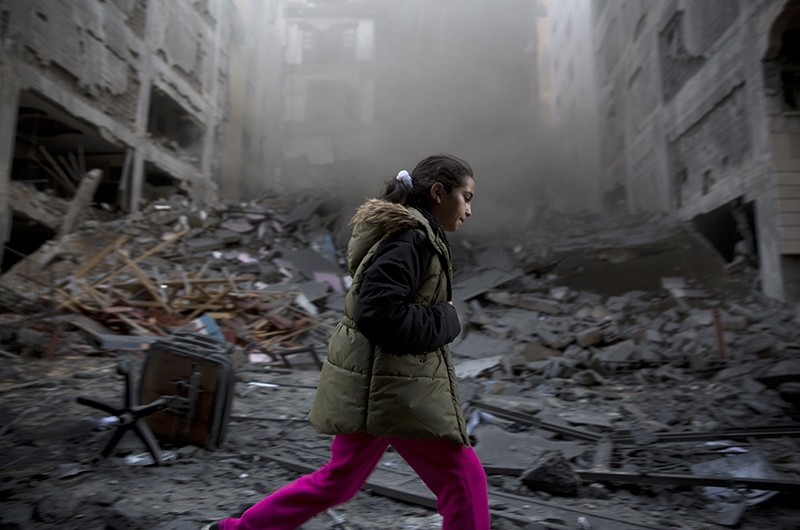 A Palestinian girl walks next to a destroyed residential building hit by Israeli airstrikes in Gaza City, Tuesday, Nov. 13, 2018. (AP Photo)
by Compiled from Wire Services Nov 12, 2018 12:00 am

Three Palestinians were killed during the strikes Monday night. Another injured during an Israeli attack on the town of Rafah, south of Gaza, died later, according to a statement by Palestinian Health Minister Ashraf al-Qidra.

A fifth fatality, a Palestinian youth, was announced by al-Qidra Tuesday morning, along with another Palestinian who was injured in the strike that targeted a farmland in the northern Gaza Strip.

A seventh person was killed when the Israeli army targeted concentration of Palestinians in northern Gaza Strip Tuesday afternoon.

The Ramallah-based Palestinian government on Tuesday held Israel responsible for the eruption of violence in the blockaded Gaza Strip.

"The occupation government is dragging the region into further dangers and tensions," government spokesman Youssef al-Mahmoud said in a statement.

He warned the Israeli government against committing "new massacres against the Palestinian people."

The strikes on Monday were announced soon after a bus was hit by fire from Gaza, and following overnight clashes in Gaza that left dead an Israeli officer and several Palestinians, including a Hamas commander.

The vehicle was damaged in the incident, an Israeli army spokesperson said. Israeli media reported that the bus was hit by a mortar and that one Israeli man was seriously injured in the attack.

Artillery units near the Gaza-Israel buffer zone have reportedly targeted concentrations of Palestinian activists in central Gaza, along with resistance positions in the town of Jabalia and the city of Deir al-Balah.

In a joint statement, Palestinian resistance factions announced that they had begun firing rockets into southern Israel in response to an Israeli military incursion into the southern Gaza Strip late last night.

"In response to yesterday's crime, the joint command of Palestinian factions announce the beginning of bombardment of the enemy's settlements with scores of rockets," Hamas's armed wing said in a statement after funerals were held for the militants.

The Israeli military said some 400 rockets and mortars have been launched from Gaza since the current round began on Monday afternoon, with about 100 of them intercepted by Israel's Iron Dome defense system.

Israel has hit more than 100 targets it says are linked to militants in Gaza, including a strike that destroyed the TV station of Hamas.

Seven Palestinians were killed Sunday night, including a senior Hamas commander, when an Israeli military force staged an incursion into the southern Gaza Strip.

One Israeli soldier was reportedly killed and another injured in the raid.

Hamas said the Israeli actions dealt a blow to Egyptian, Qatari and U.N. efforts to broker a long-term ceasefire and ease an Israeli blockade that has deepened economic hardship in Gaza.

Israel and Hamas have fought three wars, the latest in 2014, since the group seized the Gaza Strip from forces loyal to Palestinian President Mahmoud Abbas in 2007.

Violence has flared regularly along the Israel-Gaza border since Palestinians began protests on March 30 to demand rights to land lost to Israel in the 1948 war of its creation.

Israeli gunfire has killed more than 220 Palestinians since the start of the demonstrations, which have included breaches of Israel's border fence.

Hamas said that during Sunday's fighting, assailants in a passing vehicle opened fire on a group of its armed men, killing one of its local commanders, Nour Baraka.

A pursuit ensued and witnesses said Israeli aircraft fired more than 40 missiles into the area. Palestinian officials said that in addition to Baraka, five other Hamas men and a member of the Popular Resistance Committees were killed.

In an apparent attempt to defuse tensions, Israel's chief military spokesman said the special forces had not been dispatched to assassinate Hamas commanders, a tactic that led to wider conflict in the past and which has largely been abandoned.

The spokesman, Brigadier-General Ronen Manelis, told Army Radio that covert missions were mounted frequently, comments that suggested the Israeli force may have been gathering intelligence.

Israeli Prime Minister Benjamin Netanyahu cut short a visit to Paris, where he attended World War One commemorations with other world leaders.