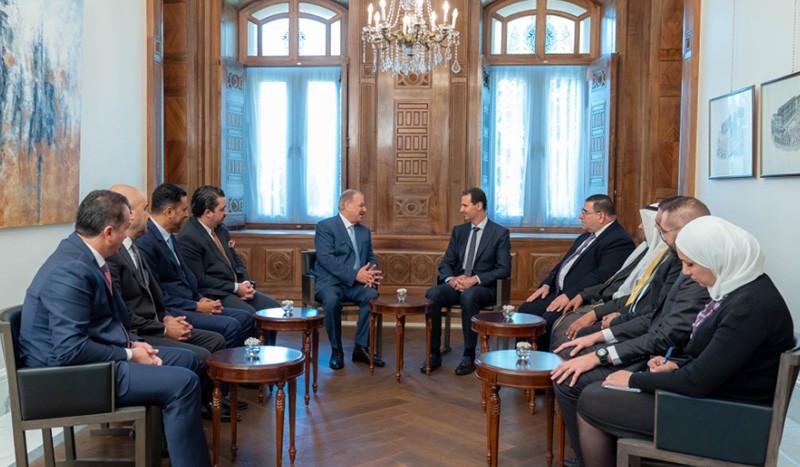 Syria's Bashar Assad met with a Jordanian delegation of lawmakers in Damascus Monday, signaling a re-establishment of ties between the neighboring countries.

Assad's regime shared photos of the meeting with the delegation, headed by parliament member Abdul Karim al-Doghmi, on Twitter.

According to Amman-based Roya News, lawmaker Awad al-Zawaida said in a statement following the meeting that Assad extended his greetings to King Abdullah II and to the Jordanian people, emphasizing the unity of the two countries and calling for the restoration of strong bilateral ties.

Al-Zawaida described Assad as responsive to all demands made by the Jordanian delegation.

The meeting signals a warming of ties between Jordan and Syria, after the Assad regime's brutal crackdown on protests in 2011 and the ensuing civil war soured relations.

In October, Jordan opened its border crossing with Syria, a key Middle East trade route and export gateway for Damascus, after three years.

The resumption of commercial trade through the crossing is as much a diplomatic victory as an economic win for Assad, whose regime has been isolated from its Arab neighbors since the war began in 2011.

Arab countries have boycotted the regime since the early days of the war, freezing its membership in the 22-member state Arab League.