Aid group says 85,000 children may have died of hunger in Yemen 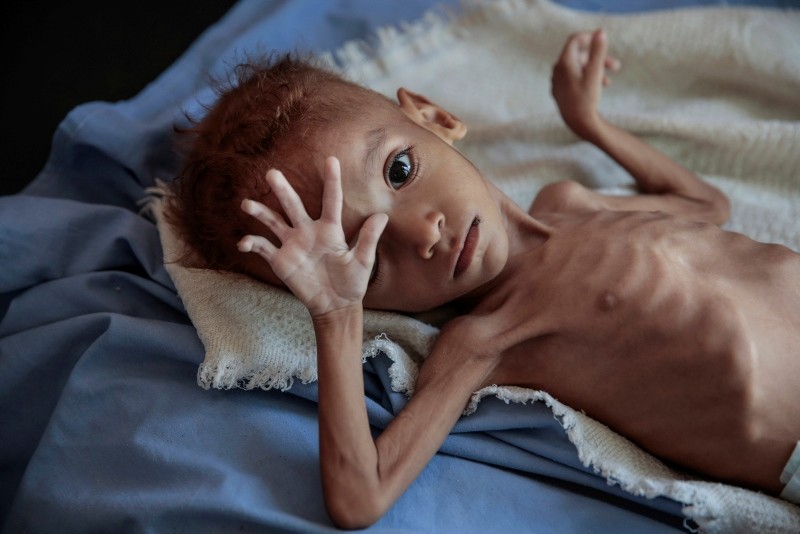 An estimated 85,000 children under age 5 may have died of severe acute malnutrition since Yemen’s civil war began in earnest with the launch of the Saudi-led intervention, Save the Children has said

As many as 85,000 infants under the age of five may have died from starvation or disease since 2015 in war-ravaged Yemen, humanitarian organization Save the Children said Wednesday. It said the estimate was based on data compiled by the United Nations, which has warned that up to 14 million people are at risk of famine in the war-torn Yemen.

Yemen, one of the poorest Arab countries, is locked in a nearly four-year-old war that pits Iran-aligned Houthi rebels against the government backed by Saudi Arabia, the United Arab Emirates (UAE) and the West.

"For every child killed by bombs and bullets, dozens are starving to death and it's entirely preventable," said Tamer Kirolos, Save the Children's country director in Yemen. "Children who die in this way suffer immensely as their vital organ functions slow down and eventually stop," he said. "Their immune systems are so weak they are more prone to infections with some too frail to even cry. Parents are having to witness their children wasting away, unable to do anything about it."

For several weeks at the end of 2017, the Saudi coalition imposed a blockade on Yemeni ports that it said was to prevent Houthis from importing weapons. This had a severe impact on Yemen, which traditionally imports 90 percent of its food.

Jan Egeland, the head of the Norwegian Refugee Council earlier said since the blockade, food and fuel imports remain low and prices have soared, leaving millions on the brink of starvation as violence continues. "The past 12 months have been a never-ending nightmare for Yemeni civilians," he said in a statement, as reported by Reuters.

Yemen has been wracked by conflict since 2014, when Shiite Houthi rebels overran much of the country. Saudi Crown Prince Mohammed bin Salman (MBS), the former defense minister, and Saudi Arabia's allies launched Operation Decisive Storm in March 2015. Riyadh has accused the Houthi rebel group of serving as a proxy force for Iran, Saudi Arabia's arch-foe in the region.

Civilians have borne the brunt of the conflict, which has killed over 10,000 people and sparked the world's worst humanitarian crisis. In September, the Saudi-led coalition admitted that mistakes were made in an August airstrike that killed 40 children, an event considered an apparent war crime by the U.N. human rights body. Saudi Arabia's alleged human rights violations are not limited to that country but have expanded beyond its borders, since there is an endless war in Yemen. The U.N. has made no progress in attempts to get the warring sides to negotiate a peaceful resolution to the conflict.

Fighting between Saudi-led coalition forces and Houthis flared up again around the Red Sea port city of Hodeida despite U.N. calls for a cease-fire. The escalation, which followed a lull that had been in place since earlier this month, began late on Monday with coalition airstrikes hitting the rebels, undermining the latest U.N. efforts to end the three-year war.

The battle over the strategic town has come at a price for Yemeni residents, who had already been suffering from shortages of basic materials, including food and clean water. Early on in the battle, no fewer than 500 people had died, while thousands lived in fear, trapped with no means of escape or a safe place to take refuge. Saudi Arabia remained indifferent to calls from the international community, the increasing humanitarian price of the war and the fact that the battle would remain futile.