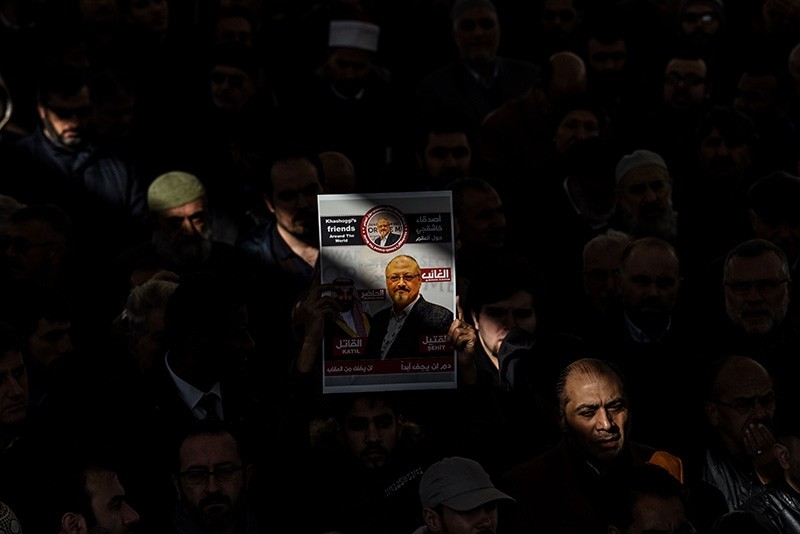 In this Nov. 16, 2018 photo, a person holds a banner of Jamal Khashoggi during a symbolic funeral prayer for the Saudi journalist, killed and dismembered in the Saudi consulate in Istanbul in October, at the courtyard of Fatih mosque. (AFP Photo)
by Daily Sabah with Reuters Nov 22, 2018 12:00 am

France said on Thursday it had imposed sanctions, including travel bans, on 18 Saudi citizens linked to the murder of Saudi journalist Jamal Khashoggi and warned that more could follow depending on results of the current investigation.

The bans bind all members of the European Union's passport-free Schengen zone, it said.

"The murder of Mr. Khashoggi is a crime of extreme gravity, which moreover goes against freedom of the press and the most fundamental rights," the foreign ministry said in a statement.

"France asks that all light be shed on the manner in which such an act may have been committed. It expects from the Saudi authorities a transparent, detailed and exhaustive response," the statement added.

French reaction has been relatively guarded given it is keen to retain its influence with Riyadh and protect commercial relations spanning energy, finance and weapons sales.

Khashoggi was killed and dismembered on Oct. 2 in the Saudi consulate in Turkey's Istanbul. The 59-year-old was a veteran Saudi journalist who wrote for the Washington Post and other international media. He had become one of the leading public critics of Crown Prince Mohammed bin Salman, whose father is the Saudi king.

Last week, the Saudi state prosecutor's office announced that 21 individuals had been taken into custody and charges set against 11 of them. Five of them face possible execution for the murder, according to the prosecutor.

France said in its statement that it opposed the death penalty in all circumstances.

Turkey reiterated Tuesday that it would not allow a cover-up of the investigation on Khashoggi's killing, shortly after U.S. President Donald Trump said that Washington would not deter its ties with Riyadh in a statement that attempted to eliminate the Saudi crown prince's role in the incident as the ultimate person giving the order for the murder.

"The truth has to come out on who gave the instructions regarding his killing," Turkish Foreign Minister Mevlüt Çavuşoğlu told reporters in Washington following a meeting with his U.S. counterpart Mike Pompeo, adding that Ankara was not satisfied with the level of cooperation it has received so far from Riyadh as part of the investigation into what has been described as a "premeditated" and a "political" murder by many.

Çavuşoğlu reiterated that Turkey would take formal steps to seek a United Nations-led international inquiry into the incident if Ankara reaches an "impasse" with Riyadh.