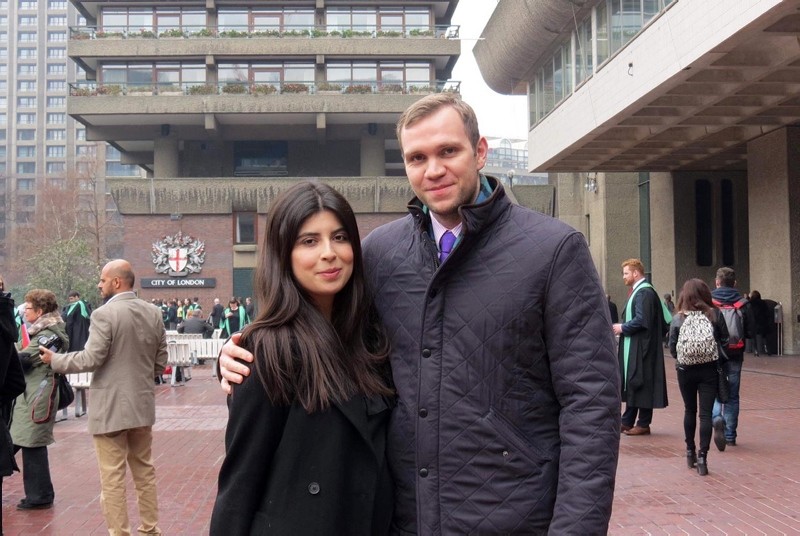 A handout photo taken in Jan. 2017 and released by Hedges family in London on Nov. 23 2018, shows British student Matthew Hedges (R) and his wife Daniela Tejada posing in London after Daniela's MA Graduation ceremony. (Photo by HO/Daniela Tejada/AFP)
by Nov 26, 2018 12:00 am

The United Arab Emirates on Monday pardoned a British academic jailed for life on spying charges, granting his family's request for clemency minutes after showing a video of him purportedly confessing to being a member of U.K. intelligence agency MI6.

The UAE president issued the pardon as part of a mass clemency of more than 700 prisoners to mark the country's National Day, according to a statement carried by state news agency WAM.

The pardon was effective immediately and Matthew Hedges, a 31-year-old doctoral student at Durham University held for more than six months, will be allowed to leave the country "once formalities are completed," the statement said.

Britain's foreign minister welcomed the move, saying the U.K. government had not agreed with the charges against Hedges but was grateful to the UAE for resolving the issue speedily.

Hunt said it was also a "bittersweet moment" because he was thinking about innocent people still detained in Iran.

"Justice won't be truly done until they too are safely home," Hunt said.

The UAE had signaled on Friday that it was working on an "amicable solution" to the issue after London described the sentencing days prior as deeply disappointing.

Hedges has been held since May 5, when he was arrested at Dubai International Airport after a two-week research visit.

Minutes before the pardon was announced, a government spokesman showed journalists a video of Hedges purporting to confess to being a member of MI6 researching which military systems the UAE was buying.

In the video, Hedges said he had approached sources as a doctoral student as a cover.

His family and university have cast Hedges as a talented researcher who fell foul of the UAE's security and justice system. The UAE cast him as a British spy who was given a fair trial for grave espionage offenses.

"The family and I welcome the news of the presidential pardon and cannot wait to have Matt back home," Hedges' wife Daniela Tejada said after the pardon.