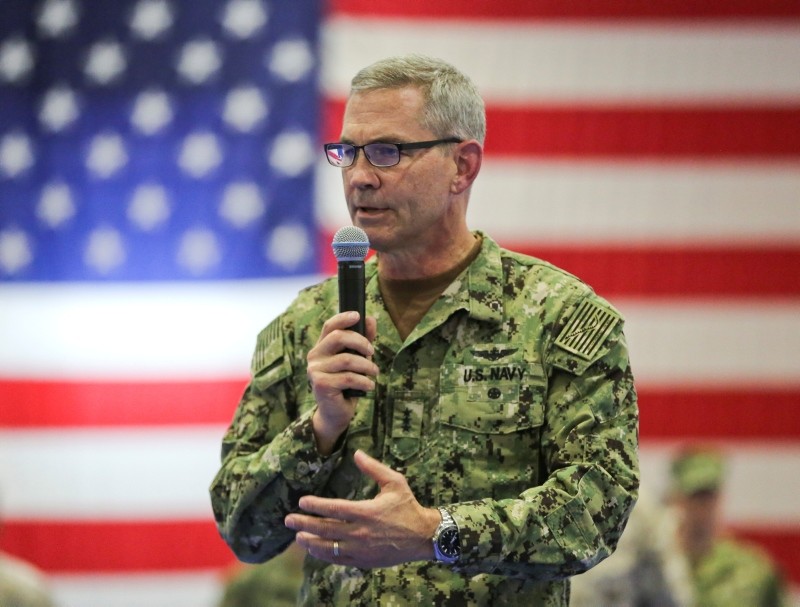 A handout photo made available by the US Marine Corps shows US Navy Vice Adm. Scott A. Stearney delivers remarks during a change of command ceremony in Bahrain, July 03, 2018. (EPA Photo)
by Compiled from Wire Services Dec 02, 2018 12:00 am

The commander of U.S. Naval Forces Central Command and the U.S. Fifth Fleet has been found dead in his residence in Bahrain.

Richardson says the Naval Criminal Investigative Service and the Bahraini Ministry of Interior are investigating the death, but foul play is not suspected.

Rear Adm. Paul Schlise, the deputy commander of the Fifth Fleet, has taken over Stearney's duties.

Richardson described Stearney as a decorated naval warrior, a devoted husband and father, and a good friend.

Meanwhile, according to defense officials quoted by CBS News, Stearney was found dead of "apparent suicide."

The Chicago native entered the U.S. Navy in 1982 after graduating from the University of Notre Dame with a bachelor's degree in economics. He later obtained a master's degree from the National Defense University.

In the U.S., Stearney served in various roles, including as instructor and readiness officer at Navy Fighter Weapons School, according to his official biography. He also held various senior posts, including as director of operations at U.S. Central Command.