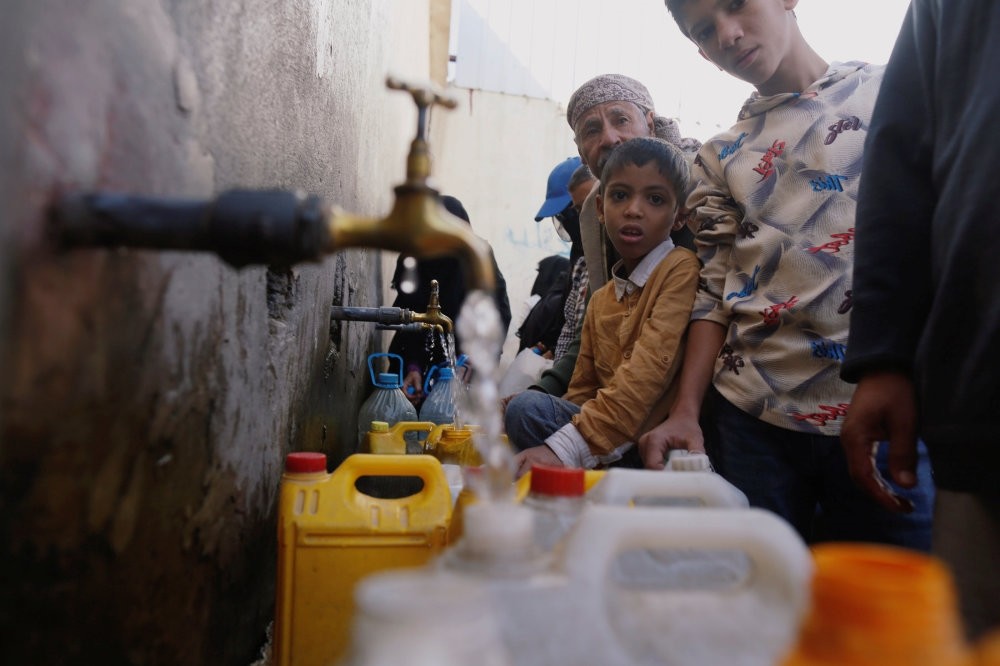 People collect drinking water from a charity tap amid fears of a new cholera outbreak in Sanaa, Yemen, Nov. 5.
by Compiled from Wire Services Dec 04, 2018 12:00 am

In the latest diplomatic bid to end Yemen's civil war, U.N.-sponsored peace efforts to stop the nearly four-year war have been underway

After U.N. special envoy Martin Griffiths shuttled between the parties to salvage a previous round that collapsed in September after the Houthis failed to show up, the peace talks are set to start as early as tomorrow, according to reports.

Yemen's Houthi group said it was ready to travel to Sweden for peace talks after the Saudi-led coalition approved the evacuation of some of their wounded for treatment, paving the way for negotiations to end the nearly four-year war.

The United Nations is trying to reconvene talks between the Saudi-backed government led by Abd-Rabbu Mansour Hadi and the Iranian-aligned Houthi group to agree on a framework for peace and a transitional governing body. A previous round in Geneva collapsed in September when the Houthis failed to show up. The evacuation on a U.N. chartered plane marks a key step in kickstarting stalled negotiations as world powers press for an end to the brutal four-year conflict that has pushed Yemen to the brink of famine. Yemeni officials Griffiths arrived in the capital yesterday, where he was expected to hold last-minute talks with the rebels. Officials said some 50 rebels wounded in fighting will be flown to neighboring Oman for treatment. The fate of the wounded rebels had been a stumbling block to the start of a previous round of aborted peace talks in September.

Their planned evacuation yesterday on an Ethiopian Airways flight from Sanaa would meet one of the conditions set by the Houthi rebels to participate in peace talks in Sweden later this week. It is the latest diplomatic bid to end Yemen's civil war, which is in its fourth year.

Iran offered support yesterday to the planned U.N.-brokered peace talks on Yemen, saying that it was ready to help find a political solution. "The warmongers have not achieved any of their political and hegemonic goals after four years of bitter war and destructive aggression against Yemeni people," Iran's foreign ministry said in a statement. World powers should put "pressure on the exporters of arms to the aggressors to facilitate the peace process in Yemen and let the Yemeni people decide their country's fate free from the outsiders' interference," the Foreign Ministry said.

Yemen has been wracked by conflict since 2014, when the Shiite Houthi rebels overran much of the country. Crown Prince Mohammed bin Salman (MBS), the former defense minister, and Saudi Arabia's allies launched Operation Decisive Storm in March 2015. The outrage over the killing of journalist Jamal Khashoggi in Saudi Arabia's Consulate in Istanbul has increased scrutiny on Riyadh's role in conflicts in the region, potentially giving Western powers, which provide arms and intelligence to the Saudi-led coalition, greater impetus for action.

Civilians have borne the brunt of the conflict, which has killed over 10,000 people and sparked the world's worst humanitarian crisis. U.N. agencies say that 14 million people are at risk of starvation in Yemen. In September, the Saudi-led coalition admitted that mistakes were made in an August airstrike that killed 40 children, an event considered an apparent war crime by the U.N. human rights body. Saudi Arabia's alleged human rights violations are not limited to the continuing war in Yemen.