US fails to win UN condemnation of Hamas 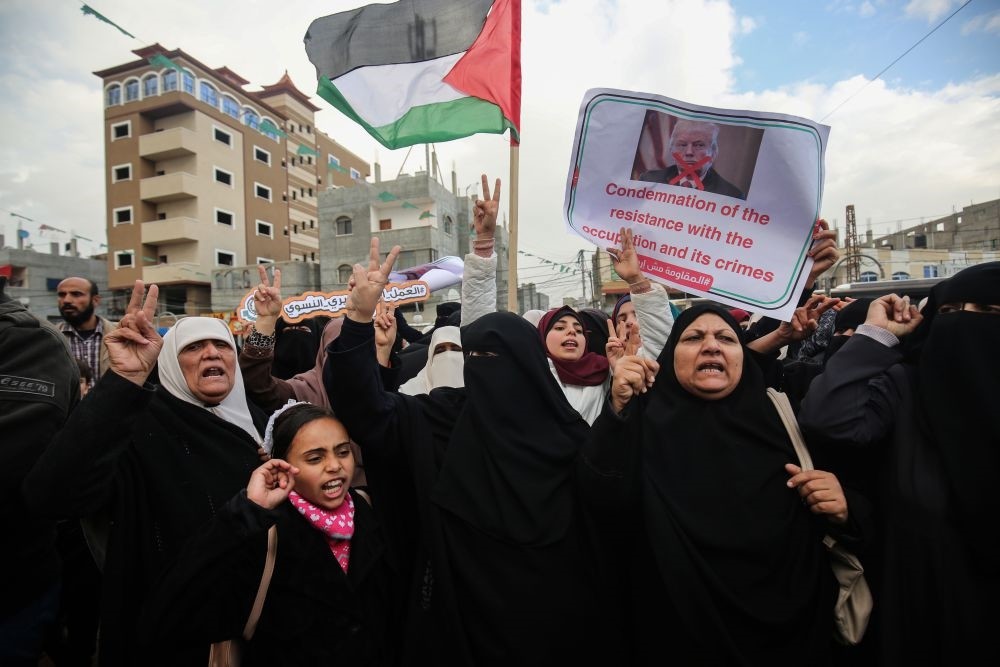 Palestinians raise national flags and banners during a demonstration against a U.S.-drafted resolution in the town of Rafah in the southern Gaza Strip, Dec. 6.
by Compiled from Wire Services Dec 08, 2018 12:00 am

The U.N. General Assembly rejected a resolution seeking to condemn Hamas, one of U.S. Ambassador to the U.N. Nikki Haley's final acts in the international body before she leaves her post

A U.S. attempt to get the United Nations to condemn violence by Palestinian resistance group Hamas for the first time failed on Thursday because the draft resolution fell short of votes needed in the General Assembly. The resolution required two-thirds support and while Assembly resolutions are non-binding, they can carry political weight. The U.S. text received 87 votes in favor, 58 against, 32 abstentions and 16 countries did not vote.

Outgoing U.S. Ambassador to the United Nations Nikki Haley had written to member states on Monday to urge them to vote for the U.S.-drafted text, warning them: "The United States takes the outcome of this vote very seriously." Haley, who will step down at the end of the year, has been a staunch defender of Israel.

The Palestinian Authority on Friday welcomed the rejection by the U.N. General Assembly of a U.S. draft resolution condemning Palestinian resistance group Hamas. In a statement, the Ramallah-based authority thanked member states that voted against the U.S. draft. "We will not allow the condemnation of the Palestinian national struggle," it added in the statement cited by the official Wafa news agency.

Hamas, for its part, thanked all member states that voted down the U.S. draft resolution. "This was a great victory for Palestinian rights, Arab and Islamic supporters and for the free people in the world and lovers of the Palestinian people," the group said in a statement. It described the failure of the resolution as a "major defeat to the U.S. administration and its policies in the region."

U.S.-Palestinian relations have been strained since last year when U.S. President Donald Trump unilaterally recognized Jerusalem as the capital of Israel, triggering global outcry. Palestinians have long been frustrated with a lack of movement in peace efforts as well as anger with President Trump, who they accuse of being unfairly biased toward Israel.

Twenty-five years after the Oslo accords, peace seems far out of reach for now. Peace efforts have been at a standstill since a U.S.-led push collapsed in 2014. The U.S. administration under Trump has been forcing Palestinian factions to surrender to Israeli demands and to give up the two-state solution. Trump has been heavily criticized by the Palestinians for a series of moves that they say show distinct bias toward Israel, starting with his recognition last year of Jerusalem as Israel's capital. His administration has also slashed aid to the Palestinians by hundreds of millions of dollars and ended U.S. support for the U.N. agency (UNWRA) that helps Palestinian refugees.

Since Trump's controversial Jerusalem move, the Palestinian Authority has rejected any U.S. mediation in the Middle East peace process. Palestinian President Mahmoud Abbas earlier compared the expected Trump peace plan to the 1917 Balfour Declaration, which saw the British government commit to the creation of a state for Jews in historic Palestine.