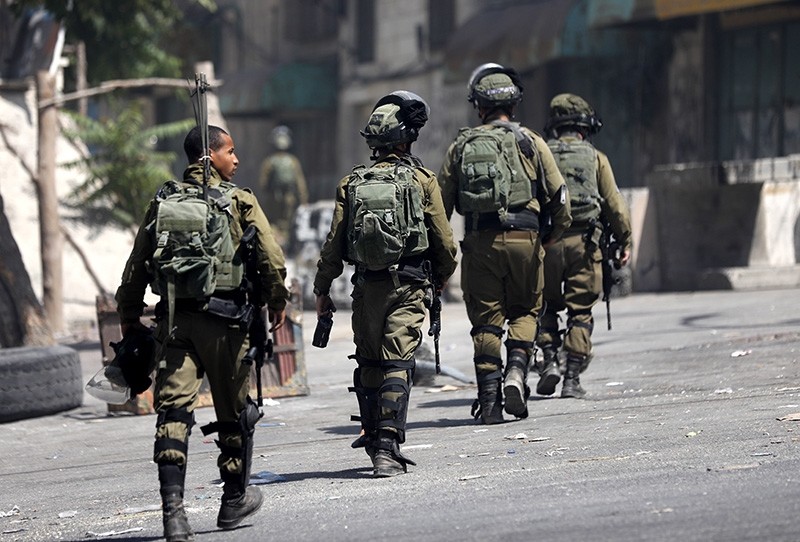 Israeli soldiers take positions during clashes with Palestinians in the occupied West Bank city of Hebron on July 27, 2018. (EPA Photo)
by Compiled from Wire Services Dec 11, 2018 12:00 am

A Palestinian man was shot dead by Israeli forces near the occupied West Bank city of Hebron on Tuesday, according to the Health Ministry.

Omar Awawdeh, 27, was shot in the back by Israeli forces and rushed to hospital in a serious condition, the ministry said in a statement.

"He soon died of his wounds at the hospital," the ministry said.

Israeli police said he was shot after his car "drove toward border police" at a checkpoint at the entrance of the town of Tarqumiya near Hebron.

"Shots were fired at the suspect vehicle. No injuries to officers," spokesman Micky Rosenfeld said in a statement, adding that the incident was being investigated.

The killing follows overnight raids across the occupied West Bank, in which Israeli forces rounded up 20 Palestinians, according to a Palestinian NGO on Tuesday.

The Palestinian Prisoners Society said in a statement that 15 people were arrested in raids in the cities of Tubas, Tulkarem and Nablus and in the northern West Bank.

Five more Palestinians were detained in the city of Ramallah, the NGO said.

The Israeli military has yet to issue a statement on the arrests.

According to Palestinian figures, more than 6,000 Palestinians continue to languish in Israeli detention facilities, including six parliament members, 52 women and 270 minors.